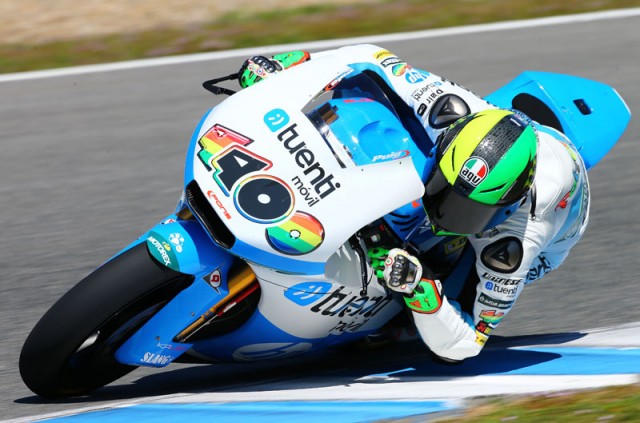 Pere Gurt, manager of Pol Espargaro has revelaed that the sought after Spanish star is in talks with other companies than Yamaha.

Cal Crutchlow had been expected to loose his Monster Energy Yamaha Tech3 seat, as the only Yamaha rider to have less than a year left on his current contract. (it has come out that Crutchlow only signed a one year deal as he was unsure over the Yamaha/Tech3 partnership going into 2014)

Together with this from Herve Poncharal: “Yamaha and Espargaro have spoken is a certainty. He is one of the most talented young riders in Moto2. Personally, I have never talked to Espargaro on behalf of Tech 3…what I do know is that Yamaha has four bikes and, when Cal Crutchlow is the only rider who is contracted only for this year, some think Espargaro could take his place.”

It seemed a dead end for Cal.

However in a interview with motocuatro.com, Gurt revealed that he and Pol are in talks with more than just Yamaha over the future of the 2012 Moto2 runner up.

“We spoke with Yamaha, and we have also talked to other brands. Pol is part of a generation of riders who, more or less, are all in MotoGP and his future is there.

“His breakthrough season was last year, competing with Marquez, beating him on occasions, and taking him to the penultimate race, fighting for the world title, has given him a value that has served for MotoGP teams, and they’ve have noticed him.”

He went on to talk about the preferences of the rider, and what machinery he wants to be on for 2014.

“The ideal would be factory rider. What Jorge (Lorenzo) was, he results came quickly, what Marc (Marquez) is, and the results have come quickly, there is nothing better in MotoGP than to be in an official team. But it can’t happen, because these seats are occupied.

“The second option is to be factory rider, and the company decide where to run the rider. This formula has worked in the past with Rossi, with Simoncelli, with Spies and, now, with Bradl. It’s the next best protected by the factory.

“The third, fourth or fifth option we’d contemplate, because both Paco Sanchez and I (the two managers of the Espargaro brothers) believe that Pol is MotoGP rider and should be on a good bike.”

He was denied any rumours that Pol had already signed a pre-agreement with Yamaha, much like the one that Jorge Lorenzo signed back in 2007.