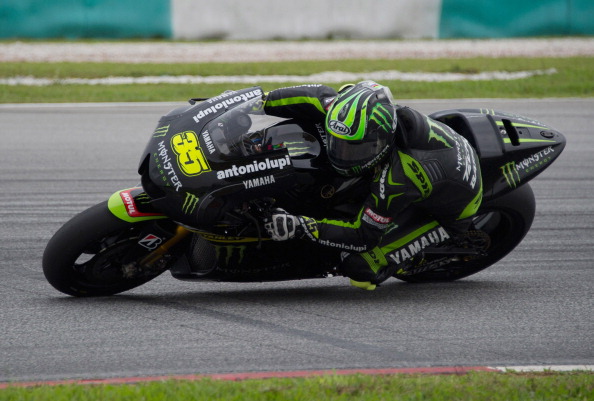 On a slow burner of a final day of pre season of MotoGP testing, Britons Cal Crutchlow stole the show and topped the time sheets.

With rain falling for most of the day, the action didn’t properly start until just after 16:00, when most of the riders began to trickle one by one, and lap times began to tumble with Crutchlow grabbing the lead from Jorge Lorenzo and after just four laps.

The final hour of testing was reminiscent of a qualifying session, with lap times falling and the lead exchanging hands, and it wasn’t until Cal Crutchlow did a  lap which stopped the clock on a 1:39.511.

Just yesterday the Coventry rider was moaning about the perceived lack of updates he had been receiving from the factory, but his 2013 Tech3 M1 was more than capable of firing him to the top of the timing screens.

“It is obviously very satisfying to finish the test with the fastest time because it shows what a really good job I did and what a great job my Monster Yamaha Tech 3 Team did too. It is a shame we didn’t get the chance to get in a lot more dry laps but I have been very fast and consistent and that gives me a lot of confidence for when we return to Jerez for the third race,” said Crutchlow.

“This morning’s rain meant the track wasn’t in a great condition in the last two hours and I felt I could have definitely gone faster if there was more grip available. But it is the same for everybody and we came out on top, so that’s positive. Each time I tried to improve my pace at the end I came across some traffic, so I’ve no doubt I could have gone faster.

“It has been a positive pre-season and I think I have shown I have made another big improvement for this year. This result gives me a lot of confidence going to Qatar but my goal will be to finish in the top six and get some early momentum like I did last season. It is going to be a very exciting season and now I can’t wait to get to Qatar.”

Yesterday’s fastest man Valentino Rossi jumped from seventh to second with one lap, and ended up 0.224s from the satellite Yamaha rider. It was a encouraging test for the returning champion, and he will go to Qatar much more optimistic than he would’ve five days ago.

Breaking what would have been yet another Yamaha 1-2-3, was LCR Honda’s Stefan Bradl. The German rider took third spot from the world champion by just over a tenth of a second, and Bradl has seemingly solved the lack of confidence that he had with his front end which caused him to crash twice in the last three days, and has been playing havoc with Bradl in Jerez.

Lorenzo was fourth fastest, although continued to work on his long run pace rather than just focusing on one lap to try and top the timing screens, in spite of that the world champion was only half a second off Crutchlow.

Marc Marquez was fifth position, and continued to work on the rear grip issues he has been having, and also tried to solve any chatter issues that Marquez was having. Marquez was only 0.619 behind the fastest lap of the day.

Following Marquez, was another rookie Andrea Iannone. Iannone was sixth fastest, and he lead a quartet of Ducati riders who were from sixth down to ninth, and were separated from the top by 0.820s to a 1.370s. After Iannone there were factory riders Nicky Hayden, Andrea Dovizioso and development rider Michele Pirro, respectively.

Closing out the top ten was CRT rider Randy de Puniet who finished ahead of the last MotoGP prototype rider Bradley Smith, and his Aspar team mate Aleix Espargaro.