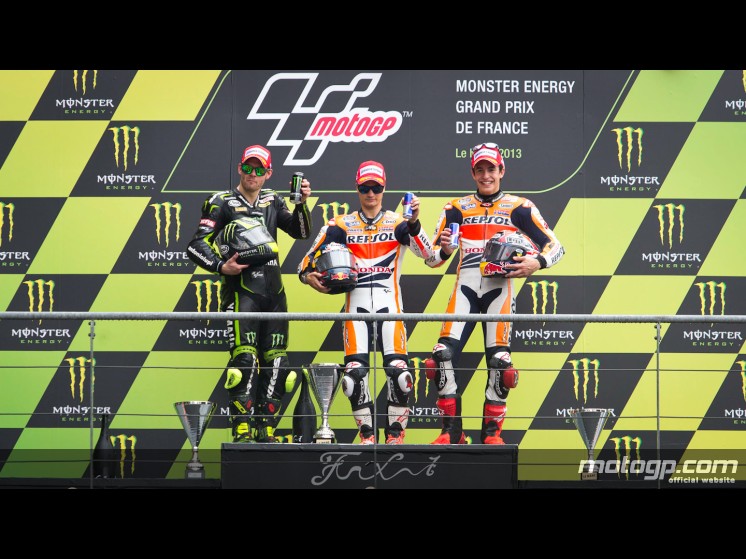 Dani Pedrosa claimed his second win of the season at a soaked Le Mans to climb to the top of the championship standings.

Claiming his second consecutive win, Pedrosa was both agressive and wonderfully smooth at the same time, ensuring nobody could live with the Spaniard today.

The Spaniard was in a battle with the surprisingly strong Andrea Dovizioso for the first fourteen laps, only to pass the Italian at garage vert before racing into the distance for another win.

Second place, and top Yamaha went to the lionhearted Cal Crutchlow. Crutchlow, at his Tech3’s home race was battling with a broken tibia sustained yesterday morning demonstrated his British bulldog spirit to claim his best finish in MotoGP.

Rounding out the podium was teenage star Marc Marquez. The Spaniard was on pole position, but suffered a horrid start on his competitive wet debut, and dropped as low as eleventh position. However he soon regrouped and made his way back through the field and eventually claim third position from Andrea Dovizioso on the penultimate lap.

Even after all the work, it is plain to see that the Ducati is still competitive in the wet, and Andrea Dovizioso was on hand to show it today, after claiming the hole shot and leading the race for the first half of the race, and exchanging the lead with Pedrosa several times, before the Spaniard managed to get away. It wasn’t until the 23rd lap that Dovi was passed by Crutchlow, and eventually Marquez. But it was still another highly impressive performance from the Italian on the Ducati.

Nicky Hayden was behind his team mate, and ended up fifth, but for a large proportion of a race the American found himself battling with Valentino Rossi and Cal Crutchlow, until Rossi’s crash and error make him lose touch.

Sixth went to Alvaro Bautista who found himself battling with Lorenzo. The Spaniard battled with the world champion for a large majority of the race before eventually coming out on top.

The Factory Yamaha team had a weekend to forget. Jorge Lorenzo found himself up the sharp end of the field, however after just eight laps into the race began to visibily fade, suffering from technical issues to finish 7th and a massive 28 seconds from Pedrosa. Early reports suggested that Lorenzo was hampered by a misted up visor, but the World Champion and his team soon ended the rumours.

Valentino Rossi suffered a crash from fourth on the 17th lap at garage vert. The Italian was closing on Cal Crutchlow when the fall happened. The nine times world champion was able to remount, but didn’t finish any higher than a lowly 12th position.

Pramac test, and replacement rider Michele Pirro ended up finishing in 8th position, making it three Ducati’s in the top 10. Bradley Smith claimed an impressive ninth position as he continued his learning process aboard the Yamaha M1 on his debut wet outing too. Stefan Bradl rounded out the top 10 after remounting from an early fall from his LCR Honda a few corners before Rossi did.