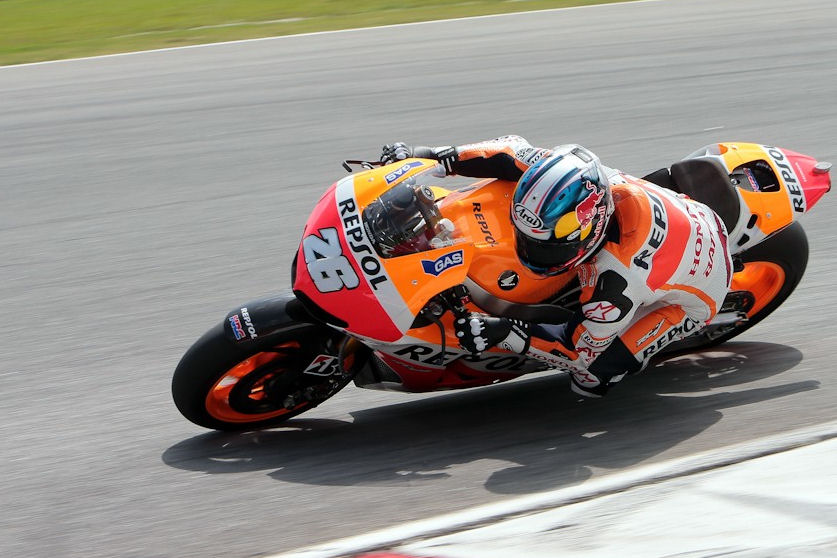 The 1993 500cc world champion spoke about Pedrosa to Spanish and French press and said: “Dani lacks nothing,” Schwantz said, “but he has too much – like Alberto Puig. Dani needs to reach another level by himself. He is like a child who cannot be freed because his parents are holding him back. I like Dani, but he’s a rider who has been with Honda for eight years and not won anything. I would like him to prove me wrong, but I don’t think that will happen.”

He also spoke about Puig; “Puig’s work is to find new talent and he has proven that he knows what he is doing and he does it honestly. Many of the riders he has helped have become champions or runners-up.”

While this bought out a timid response from Pedrosa in which he said he was disappointed with what Schwantz had said, and also told Schwantz to look at records as Pedrosa has achieved more than Schwantz in some aspects, however it was still a tame reply.

But now Puig has had his own say at Schwantz’ comments, and in a much more direct, public letter to Schwantz, he has called the Texan out on many things.

Puig’s letter reads: “With regards to the statement made by Mr. Kevin Schwantz over the weekend of the Grand Prix in Texas, I feel I should share my opinion on the matter which refers directly to myself.

From the sporting point of view, I will limit myself solely to statistics and the archives, so we are talking about 100% fact as opposed to opinions or the thoughts of somebody who was here years ago.

Literally speaking, Mr. Schwantz commented that ‘Dani Pedrosa has not won anything in eight years’.

Well, let us analyse that. For starters, beat in mind that Pedrosa has three world titles to his name (one in 125s and two in 250s) to the one of Schwantz in 500s. I have no doubt whatsoever, having been a 500 rider myself, that one single 500 title is more important than those of the other categories – that is true. However what you cannot do is detract from the three titles Dani has won in the intermediate classes. Dani and all riders throughout history have achieved World Championship titles in those categories. They were all great champions, regardless of the engine displacement they did it with, and they all deserve respect.

To cite some data, we could say that Pedrosa has a total of 45 Grand Prix victories, while the Texan is on 25 (so it is almost double). Of those 45 victories for Dani, 22 have been in the top class; added to that is the fact that Pedrosa is credited with 113 podium finishes – 72 in the MotoGP class to Schwantz’s 51 – and 55 fastest laps (35 of those 55 in MotoGP) to Schwantz’s 26.

If we refer to this data – which is clearly in favour of Pedrosa – to say that Dani has not won anything in eight years is typical of someone who does not know what he is talking about and is very disrespectful.

Even so, Mr. Schwantz, Dani is still yet to win the title of titles – I will grant you that. But you also have to bear in mind the many advertsities he has had to overcome during his career, not least in the way of injuries. I remind you that you were forced to pack up your career because of a very bad wrist injury; well, this particular rider has over time hurt most of his body, but is still giving it everything.

Mr. Schwantz, Dani has not yet won the title, but let me tell you something that you are not going to like but which does highlight your arrogance because this is how it happened. You have that title – which took you eight years since your first race in 1986 – but let me tell you that the reason is because Wayne Rainey crashed at Misano and had to stop competing that year, which meant you practically won the title by default. You were a great rider – super spectacular, too – but by looking just at the results, you always stood in the shadow of Eddie Lawson and then Wayne Rainey. So do not brag too much about being a champion because it is true that you only won it due to circumstances.

You also mention that Dani should have persued his career without having anybody constantly by his side (notably, without having me in the way). May I remind you that – during the era of the 80s and 90s when a certain Mr. Schwantz competed – while most riders would usually travel around Europe with a friend or companion, he would never take a step without having his parents (and that is both of them) by his side. The truth is that it was unusual at that time to be working in such a way and it rather gave off the image of a boy who needed his parents close to him all day long. When you consider his recent words about me, does this not beg the question: had he not had his parents by his side all day long, protecting him, might he have won more titles? Reflect on that, Mr. Schwantz.

Aside from that, I would say to you that since I retired from racing I have worked very hard on the subject of promoting riders; usually with Dani Pedrosa, but I have also helped and directed at certain times the careers of riders like Casey Stoner, Toni Elias, Alvaro Bautista, Marc Marquez and Julian Simon. And all of them, all of them, have become World Champions.

You, Mr. Schwantz, have a riding school in Texas that for years has been offering help to upcoming riders. To this day, not one of them has managed to even qualify to come to race in Europe. Nothing at all. So, in that field, zero success.

Mr. Schwantz, you probably don’t remember this particular episode because you have experienced many others like it, but I remember it clearly:

In 1994, I was honoured to share the podium with you and Michael Doohan at Hockenheim – that original, faccinating and brutal circuit. Doohan got away a few laps from the end and I had the pleasure of fighting with you for second place on the podium. You beat me fair and square and you did it because you were so much better than I. But I remember that, at that race, my Honda was faster than your Suzuki and I thought I would be able to use your slipstream to pass on the long straights through the forest; that was until we reached the chicanes and the stadium section, under braking, when I was proven wrong. With just a few laps to go, I swore inside my helmet and then said to myself: ‘What a guy, he can brake so late!’ At the end of that race, on the podium, I felt a real respect and admiration for you – for a man who had just taught me how to brake right on the limit with a competition motorcycle.

I sadly feel, having now read your article which I think is full of disrespect towards a great champion like Dani Pedrosa and many others who have achieved titles in the intermediate categories, that the respect I had for you on that day at Hockenheim in 1994 has now compeltely disappeared.

Kevin, it was your moment and you won the 500 title, but even champions can be wrong and should know how to rectify things when they are required to.

Whether Schwantz now respons to Puig remains to be seen, but it’s sure that this won’t disappear anytime soon.