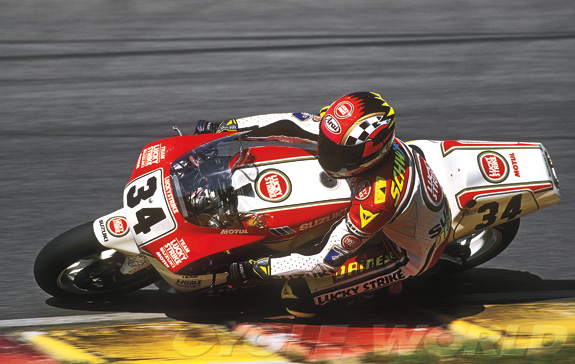 1993 MotoGP world champion Kevin Schwantz will be making a shock return at the 2013 Suzuka 8 hours, alongside Nori Haga and Yukio Kagayama.

The trio which will enter under the ‘team Yokohama Kagayama’ banner will ride a Suzuki GSX-R1000.

The return of the Texan is a real shock. Schwantz who is currently embroiled in a public spat with Dani Pedrosa’s team manager Alberto Puig, was forced into retirement in 1995 after a wrist injury, but he can’t wait to get back and add the Suzuka 8 hours to his CV.

“With two of the toughest and fastest riders, along with three riders who know Suzuka well, I believe that there is a big chance to win,” said Schwantz, who will turn 49 in June.

“Although I have been retired from racing for a while now, I have been riding frequently with my school in the US, so there should not be any problem. I can’t wait! I’ve always said that I have never won at the Suzuka 8 Hours, and would like to write a new page in my racing career by winning the race.”

Team owner Yukio Kagayama set the team up, and the former Grand Prix, World Superbike and British Superbike star thinks that “Motorcycle racing in Japan needs a big surprise like this!”

“Team Kagayama will be racing at the Suzuka 8 Hours for the first time and I thought I needed Noriyuki and Kevin, whom I both deeply respect. I’m happy to make this announcement of the ‘Dream Team’.”

“I want to thank them both for accepting my offer. Motorcycle racing in Japan needs a big surprise like this! The last time I won at Suzuka 8 Hours was in 2007 and with the help of my team-mates, I aim to win again this year,” said Kagayama.

World Superbike legend, and former GP star Nori Haga will be making his debut on a Suzuki at the Suzuka 8 hours this year.

“I made a promise with Yukio that I would race with him together at Suzuka, and now I am happy that I will be able to fulfill that promise,” said Haga.

“Along with my team-mates, we will aim to win the race and make the best of the opportunity Team Kagayama has given me.”

The trio could be the oldest team to ever enter the prestigious race, with a combined age of 126 by the time the race start on 28th July, can they make history by winning it too?