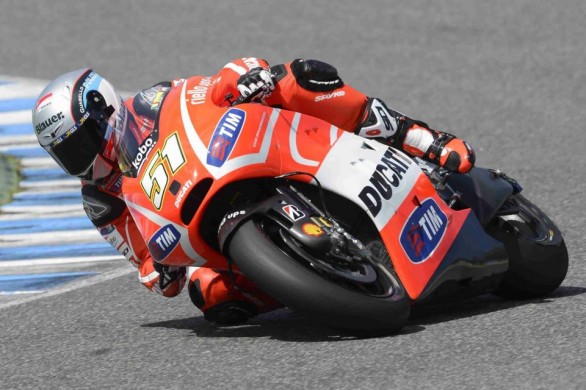 Contrary to early reports, next weekend Michele Pirro will not be replacing Ben Spies on the Pramac Ducati.

Pirro who was confirmed as wildcarding during the Jerez MotoGP round had been expected to be riding Spies’ Pramac Ducati with the Texan ruled out through injury, but it has now emerged that he won’t be replacing Spies, just racing as a wildcard.

Ducati had Pirro already confirmed as wildcarding prior to the start of the season, and Ducati don’t want Pirro riding Spies bike, instead they want him riding his own “laboratory” bike next week.

The Bologna brand intend to use Pirro and the Jerez round as a chance to test the updates that the team are constantly making, so Pirro will be riding a different bike to the other Ducati’s on the grid. It also means that Pirro won’t be using any of Spies engines that he is limited to for the season.

Pirro will be racing a scarlet red machine, the same as Nicky Hayden and Andrea Dovizioso, and will be testing the new engine angle as planned at the start of the season.