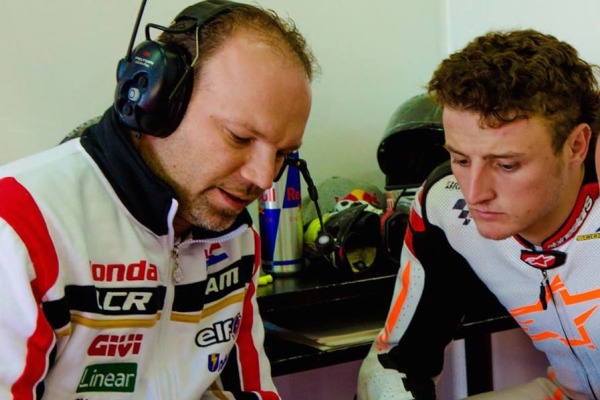 Former 500cc World Champions both believe that Australian rookie Jack Miller should’ve been given the second seat in the Repsol Honda garage.

Five time 500cc World Champion Mick Doohan believes his compatriot deserved the second seat ahead Dani Pedrosa. Miller, was given a three year contract by HRC – longer than the contract given to Marc Marquez. But rather than being placed alongside the double world champion, Miller finds himself in the LCR Honda squad. He also finds himself on a production RCV1000R bike, rather than a fully kitted RC213V, like he would’ve been in the Repsol Honda team.

Instead, Pedrosa had his stay in the Repsol Honda team extended for a further two years, despite not delivering a MotoGP title in his nine seasons with HRC.

Pedrosa has had plenty of opportunities and for somebody to knock Marc off his pedestal in the future, I’m not sure Dani is the man.

“Pedrosa has had plenty of opportunities and for somebody to knock Marc off his pedestal in the future, I’m not sure Dani is the man,” Doohan, who won all of his 500cc title with Repsol Honda told Motorcycle News.

“It would have been fantastic for Jack to be Marquez’s teammate. When I came into HRC I hadn’t raced even a 125 or 250 but it seems like you have go through Moto3 and Moto2. But a lot of people are too scared to take a risk. I just don’t know why they take the soft option.

He continued, “Marc is not going anywhere and he’s only 21 so why not bring someone through? I know they are doing that with Jack in the LCR team but what’s the point? He will be on the production bike, which will be good as long as he recognises those limits and doesn’t wonder why he is not up the front, which could do him more damage.

“Being on a bike that is inferior to the guys up front, sometimes that can be mentally draining and also a physical strain because he’s trying to get too much out of the bike. That’s the one thing about being in the factory team. It is up to you, you don’t question the bike or the technical support.”

Doohan’s thoughts were also echoed by 1993 500cc World Champion Kevin Schwantz who believed that Pedrosa’s had overstayed his welcome with HRC.

“He’s (Dani) done a good job but championships are also something he’s proven he can’t win,” said the Texan. “Tell me the last guy that got eight or nine years at Honda, didn’t win the championship and still got a job? Unless you are writing the cheque I don’t think it happens.”

“That gives him great security. He can see how it goes at LCR level and maybe after that he can get Dani’s ride. It might be that if he’s not in the top 10 he could wipe his ass with the piece of paper he signed. But a three-year HRC deal in the first time you get one is pretty special. Mick and Casey (Stoner) never saw anything like that.”