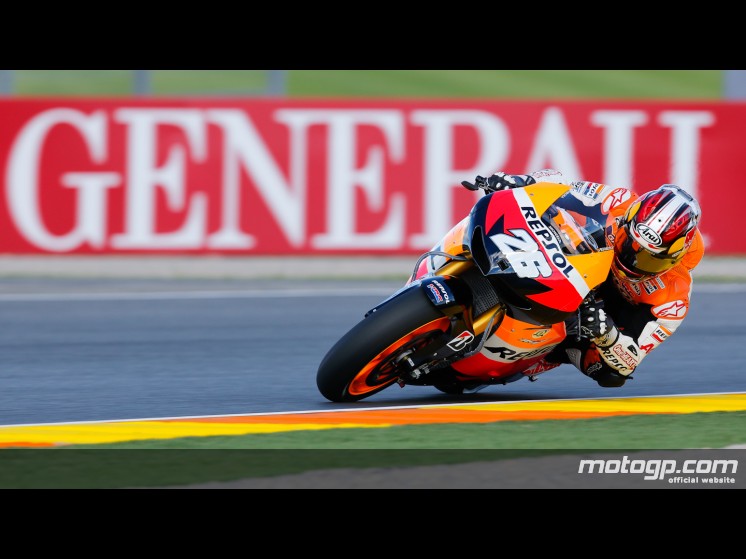 Dani Pedrosa is a three time MotoGP runner up. For the first time in his career he heads into 2013 as the favorite. But how long does he want to race for?

At 27, Dani Pedrosa has already started 184 world championship races, he has  three World Championship titles (one 125 cc, two 250cc) he has amassed 45 Grand Prix victories, with 112 podium finishes along the way.

He is now about to embark on his 13th World Championship racing season. Of those thirteen he is about to start his eighth season with the Repsol Honda team, and is considered a MotoGP veteran now.

So it’s little wonder, when Dani Pedrosa often gets asked how long he wants to stay racing. Valentino Rossi has recently signed a new two-year contract, he will be almost 36 years old when his contract expires, and Colin Edwards will be 39 next month, but he isn’t considering retirement just yet.

Pedrosa currently can not think of another eight years, but the thought of quitting, he simply can’t fathom.

Speaking with Speedweek.de Pedrosa said, “I started very young, and I came into the World Championship early.

“I already have a long Grand Prix career, but after last year’s success I’m motivated again.

“In 2010 and 2011, however, I was often hurt, I had surgery almost every three months. I often wondered ‘how long I’m going to this’, and ‘where am I to get the motivation’. At that time I often dealt with withdrawal thoughts. I had the feeling that I won’t hurt myself much longer.

“But in 2012, the passion returned to its former strength. I’m not sure how many years I’ll still go in MotoGP.

“Right now I feel that a few good years ahead of me. How many it will be, that I can not predict. “