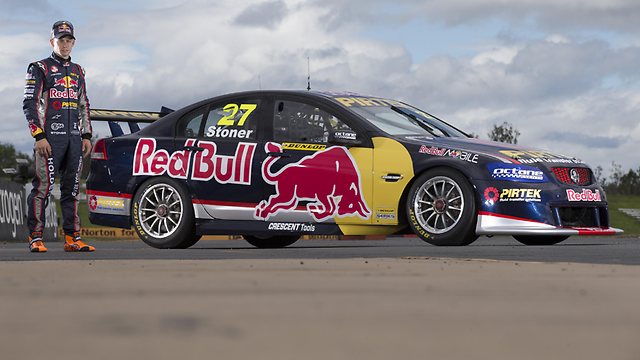 Casey Stoner today revealed his 2013 V8 Holden ahead of this weekends first race as the formed MotoGP world Champion prepares to embark on his new career.

The two time MotoGP world champion who retired at the end of the 2012 season revealed his #27 Red Bull Racing Holden Commodore VE (the 2010 version that Craig Lowndes drove).

Race fans won’t have to wait long with the car and Stoner in action this weekend on the streets of Adelaide in the Clipsal 500 race, after recently taking part in private tests at both Bathhurst and Willowbank.

Practice begins tomorrow, and Stoner’s first race is on Friday, and the Aussie is slightly nervous about it all.

“Slightly nervous, with the walls. I’ve never been on a track with walls so close,” said Stoner.

“I think it should be a lot more fun than (nervous) really I have been looking forward to trying out a lot of different tracks in this car – I’ve only really driven two.

“It’s going to be a big learning curve in a short amount of time but I’m looking forward to being able to rip around the streets and it being legal.

“At this point we have no benchmark, we have no expectations of where we can be or thoughts on what we can achieve for the weekend.

“I haven’t got any expectations on results or anything like that, I just want to have fun and rub panels with a few guys.I really just want to try and enjoy this year and have a bit of fun racing – get back to what racing is all about. Then we’ll see what happens after that.”

Stoner has only signed a one year deal in the V8 supercars to race at all seven rounds, and has very much said this is a learning year, and a bit of fun.

“There’s no long term plans. I’ve had that for too many years so I don’t want to look too far ahead.”