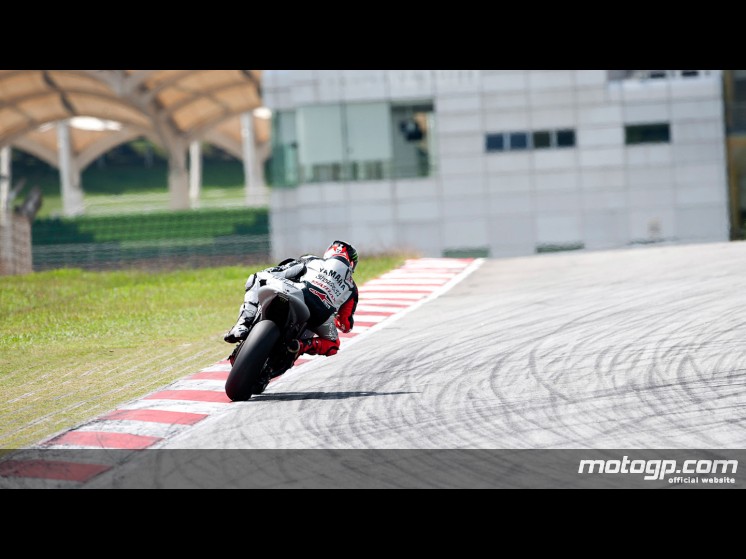 Reigning world Champion Jorge Lorenzo was the fastest rider during the second day of the second MotoGP test at Sepang.

The world Champion was fastest than compatriot and rival Dani Pedrosa, and Yamaha satellite rider Cal Crutchlow, on a day every rider improved their lap times from yesterday.

Lorenzo was quick out of the blocks early, posting a  2′00.539, with just his third lap of the day, with much better track conditions than yesterday.

Despite Lorenzo’s early time being enough for him to end the day fastest, in the early afternoon at around 1pm, the two time world champion managed to further impove his lap time down to a 2:00.282.

It was the fastest time of the day, and the test so far, but it was still a tenth off Pedrosa’s time from the first test, and still hasn’t quite got to Stoner’s record from last years pre season testing when he broke the two minute mark.

As ever with Lorenzo, it wasn’t just one flying lap before sitting in the pits, it was his incredible consistancy, and ability to pump laps under the 2.01 barrier lap after lap, and it even drew comment from his team mate. “The difference today was Lorenzo, especially his pace: 2 00s, 00, 00, 00, 00… F**k!”

The world champion however thinks the improved track conditions, and better riding was the reason he was able to knock over a second off his time from yesterday.

“The track was much better than yesterday, which surprised me a lot right from the beginning,” said Lorenzo.

“That allowed me to be stronger right from the beginning so we’re very satisfied with the improvements we’re making with the settings. On top of that, I feel stronger as a rider than the first Sepang test so I’m very satisfied.”

For the first time 2012 runner up Dani Pedrosa found himself ending the day in second position, and he was almost four tenths adrift of the world champion.

Posting 55 laps Pedrosa was focusing more today on suspension settings, and extended runs, rather than falling into the trap Stoner did last season of short fast testing runs.

“We were doing a lot of testing with Öhlins, so it was quite tough but so far we’re making good steps forward,” said Pedrosa.

“Even though we had heavy rain yesterday the track is quite good now, so tonight we’ll be taking all of the data from the first two days to establish a plan for Thursday.”

Surprise of the day came in the shape of  Yamaha Tech3’s Cal Crutchlow. The Briton managed to finish the day third, ahead of a factory Honda and a factory Yamaha.

In spite of his excellent times, Crutchlow still thinks he could have gone faster. “There didn’t seem to be a lot of grip out there again today although the lap times have improved a lot,” said Crutchlow.

“We tried something different with the front fork setting, which was in a similar direction to what Jorge (Lorenzo) uses and there were some good and bad points like with most things you test. I’m happy with my pace because we’ve tried a couple of different settings and we need to work on fine-tuning the best one.

“The main goal has been trying to stop the front of the bike lifting so much when I change direction on the throttle. The bike feels quite heavy so we need to reduce how much the fork comes up without sacrificing too much in another area like the braking. I’m sure if I had put in some new tyres at the start of the day I could have gone faster. ”

Back in fourth was 2012 Moto2 world Champion Marc Marquez on his factory Repsol Honda. The rookie said his plan for today was to do lots of laps, and its something he achieved, posting 64 laps today.

“It’s all going well at the moment,” stated Marquez.

“This morning we went out with the same setups as for the last test, trying many things and getting lots of information. We’ll see how it goes tomorrow, but I’m happy because we’re now working more with the bike; first it was with setup and then with electronics.”

Valentino Rossi returned to his 2013 spec M1, but unfortunately for him he didn’t fare much better than yesterday as he finished the day fifth fastest. Rather alarmingly for the returning nine times world Champion he was more than seven tenths adrift of his team mate, and he still couldn’t crack the 2.01 barrier.

“I’m happy, the feeling is quite good,” said the Doctor.

“Today was a very long day; I did more than sixty laps because we had a lot of work to do. We lost some time this morning with a small electrical problem that we fixed. We continued to work to increase the rear grip and traction, especially when the tyre has a lot of laps on it.

“We found something but we are still not 100% happy as we lose a little balance of the bike. Tomorrow the target is to improve the traction without losing the balance and then the bike will be very good.”

Alvaro Bautista was sixth and the last rider to be within a second of Lorenzo’s fastest time, he was also the leading satellite Honda, although he was only 0.3s quicker than yesterdays fourth place man Stefan Bradl who ended the day seventh.

Once again the Factory Ducati riders found themselves behind the Yamaha’s and Honda’s. Even with Nicky Hayden’s improvement of 1.3 seconds from yesterday time, it only moved him up one place above his team mate to eighth position, and it still left him 1.496s from the fastest time of the day. Team mate Andrea Dovizioso also shaved almost a second from his time from yesterday although he still ended the day ninth.

Once again rounding out the top ten was Yamaha Tech3 rookie Bradley Smith. The young Brit is still continuing to learn his M1, although he did admit yesterdays crash knocked his confidence a little.

Pramac Ducati’s rookie Andrea Iannone was in eleventh position, and he also managed to knock over 1.4 seconds off his time from Tuesday to finish above the CRT riders.

Aleix Espargaro was the best CRT rider today, although he couldn’t quite claim the scalp of Iannone it was still another highly impressive day from the Spaniard. Just behind him was a trio of test rider in the shape of Michele Pirro, Katsuyuki Nakasuga and Wataru Yoshikawa.

Hector Barbera managed to finish above his team mate today and claim 16th spot, although alarmingly Ben Spies on the other Pramac Ducati was 17th. Spies is still recovering his the shoulder injury which he sustained during the 2012 Malaysian race, and he had to shrug off a low speed crash at turn one, but its ominous looking signs for the Texan.

Colin Edwards was 39 today, and he celebrated his birthday, by taking the 23rd spot, although I’m sure Colin won’t need an excuse to party tonight.

Michael Laverty did his first laps of the second test today, although it wasn’t until the afternoon that his PBM team managed to sort the electrical problems out on the PBM machine. The PBM rider was able to complete only three laps this morning and another 16 in the afternoon.