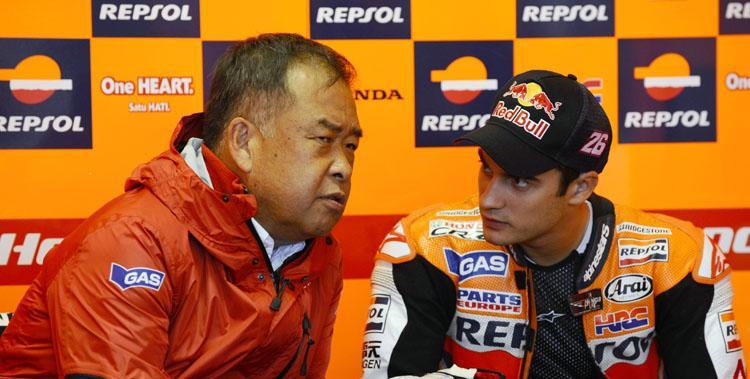 Shuhei Nakamoto has today spoken about the development of the ‘production’ RC213V MotoGP machine, with the view to sell them to MotoGP teams as a CRT machine from 2014.

Nakamoto rebuffed rumours that an early prototype of the bike is currently being tested by HRC development rider Takumi Takahashi during this weeks Sepang test.

“He races in the All Japan Championship Superbike class. Akiyoshi [the main HRC test rider] is 34. So we need to think about the next test rider. Takahashi has no real experience with a MotoGP machine. It is maybe his second time, so we have given him time here thinking as a future MotoGP test rider – but not with the production machine.”

Nakamoto then started to discuss the bike. “Unfortunately our schedule was delayed because it is not easy to meet the one million euro [price] target, when you include maintenance for the full season and other things. So we are changing a little bit the specification of the engine and chassis.”

He went into more detail, comparing the “production racer” and the four factory RC213V prototypes. He cited the main technical differences as: “On the engine side, the difference is valve springs – no pneumatic valves – and the transmission is a standard transmission [not seamless].”

And for the chassis, “at this moment we plan to use Ohlins suspension and we are talking to both Brembo and Nissin for brakes.”

As a CRT bike, it will use the Dorna Magnetti Marelli control ECU, and be entitled to the same privileges that the current CRT bikes get such as extra fuel and the special Bridgestone tyre.

“We are now building the machine,” Nakamoto continued.

“The engine has started bench testing, but the chassis side not yet. When I say it is delayed, I mean from our schedule, but the bike will be ready as planned for next year.

“Our plan was to test a prototype version of the machine at Brno [August] but now it will probably be after the [end of season] Valencia Grand Prix.”
Nakamoto hopes all of the 2014 riders will be able to try the new bike at Valencia, but that no rider or team deals were yet in place.

When Nakamoto was asked how many of the bikes HRC expect to sell, he replied: “Five riders. We can make more, but five is a reasonable number I think.”

Five is a dramatic decrease of numbers, when last season numbers of around 30-40 were being proposed.

Although there was no mention today from Nakamoto regarding the price of the €1 million.