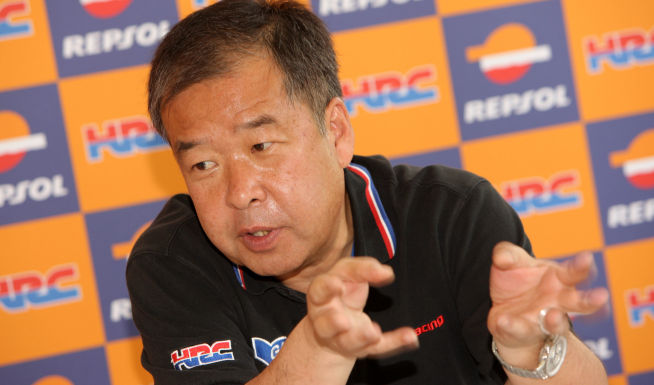 HRC Excutive vice president Shuhei Nakamoto has been talking about the new Honda RC production bike, and about its progress back in Japan.

The Japanese brand are currently still developing the RC, which they are hoping will be available to sell to private teams in the CRT class for the start of the 2014 season.

Honda’s RC will be a replica of the current RC213V, but won’t be to the same spec, without pneumatic valves or the seamless shift system that the full prototype bikes have.

The Honda RC is expected to be for sale for £850,000 (€1 million) – and for that teams would get a whole package, including engine rebuilds from HRC.

“So far we have been working with the engine on the dyno and, once it reaches the performance we expect, we will begin the next phase which is focussed on putting the bike on the track,” Nakamoto said in an interview with motogp.com.

“Regarding the matter of the programme having been delayed by almost a month, we are trying to shorten deadlines.

“From the data we have so far, I think it will be a good bike, but we must continue to work to achieve optimum levels of reliability and durability that will satisfy our customers.

“For Nissin, which forms part of our group, development of callipers and brake master cylinders is very important and MotoGP is the ideal platform by which to develop their product.

“The same applies to other enterprises when it comes to suspension, engines and so on. Nissin took new parts to Le Mans; the idea being that it is always (Stefan) Bradl who tries them first and, when it confirmed by him that there is an improvement, they are run by (Alvaro) Bautista who in-turn is responsible for the development of Showa suspension.”

There has been some rumours that Lucio Cecchinello could be interested in taking one of the Honda RV’s as a second bike in his LCR team, however these are solely rumours at the moment.