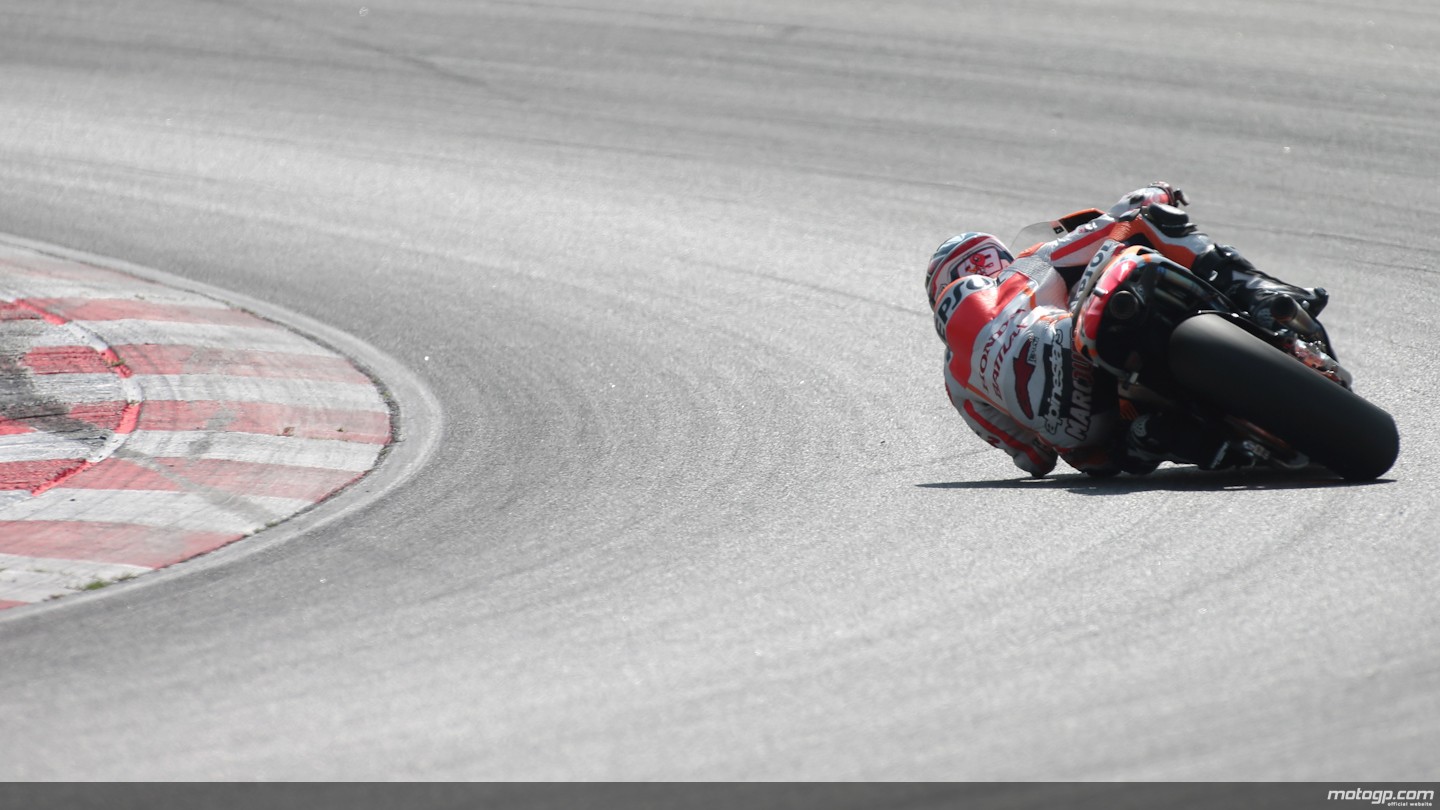 Dani Pedrosa took the honors during the final day of testing in Sepang as the MotoGP test came to an early close as rain once again fell.

With perfect conditions in the morning Pedrosa set a blistering 2.00.100 on just his fourth flying lap. The lap time was also good enough for him to brake the official Sepang race lap record and the pole record. (but not Casey Stoner’s 2012 Sepang test record)

Pedrosa finished early for the day, and at 3pm he left the track with his “testing programme completed”.

Jorge Lorenzo was once again second fastest, and he also posted his best time of the day on his fourth lap. A 2.00.429 was the best the world champion could manage, 0.329s slower than his compatriot, although Lorenzo set about race simulation in the afternoon, and posted a stunning 13 lap run in the afternoon with all times in the 2.01’s and the final 5 laps of the run in the 2.00s.

Looking back over the test the world champion is happy with his three days work.

“I think these three days have been positive for us. We tried many things and some of them were good. We need to reconfirm again in another track but here we were able to improve a little bit.

“I was able to make a simulation this afternoon, the first one I’ve done in Sepang in my GP career. I felt strong physically, mentally and riding so it was good. The other riders are also really strong so it promises to be an interesting season.”

Team mate Valentino Rossi moved up today, as the nine times world champion finally managed to crack the 2.01 barrier, to leave him just just 0.113 from from his team mate, but unlike the Spaniards, he posted his best time on his 43rd lap.

Speaking after the test the Doctor said: “I’m very happy, all three days were very good. We worked hard on the bike and improved day by day. The third day was the best, we were able to stay less than half a second from pole position and the lap time is higher which is interesting.

“Today we finished third in the standings which is theoretically the front row so I’m very happy with this first test.”

Marc Marquez finished out of the top three for the first time today, and he also suffered his first fall aboard the RC213V.

The crash was a small lowside in the final corner, not injuring, nor deterring himself in anyway, although he did manage to trash a bike.

It didn’t appear to know his confidence as when he returned, he still managed to post a stunning 2:00.636.

The Spaniard didn’t let the fall effect him, and he is extremely happy with his work thus far.

“I am very happy with the results that we have had from these three days, above all because I gradually got more consistent with my times. This was what we were looking for from this test. Day by day we improved our times, but this is secondary really. The important thing is that we made our first race simulation, which has helped me to understand the class and the bike better and his given us a lot of information for the next test.

“We also had a first crash, which luckily was fairly light. I lost the front on the brakes, but I was unhurt and the overall verdict on the test is still very positive.”

Cal Crutchlow further backed up his good work, and he once again finished fifth and he matched the Doctor today in stopping the clock inside of 2.01. The Brit has been showing exceptional pace, and today focused on used tyre running, so the pace he was producing is positive for himself and the Tech3 team.

Stefan Bradl was sixth, and the first of the satellite Honda’s and he was also the final rider within a second of Pedrosa. Posting a best time just 0.269s from Crutchlow’s time the German rider will have aspirations of a podium after a bright start in Malaysia.

Alvaro Bautista was right behind Bradl, and the Spaniard continued to work and develop the Nissan brakes and Ohlins suspension on his Gresini RC213V.

MotoGP rookie Bradley Smith silenced doubters further today with another stunning set of lap times. The Brit finished the day in eighth position, and finished the test inside of two seconds from Pedrosa.

Ducati realize they have a lot of work to do as once again the factory riders finished 9th and 10th respectively and behind all the Yamaha and Honda satellite bikes.

Nicky Hayden and Andrea Dovizioso only marginally improved on Wednesday’s times, and they will be hoping for more luck when they return later in the month.

Pramac’s sole representative Andrea Iannone was the biggest improver of all the Ducati’s as he managed to knock off two tenths from his Wednesday time and put him just 0.7 behind American Nicky Hayden.

The star of the CRT’s was without a doubt Michael Laverty. The MotoGP rookie had been expected to use the test to try and get used to the carbon brakes and bridgestone tyres, but in his PBM racing green ART he managed to climb up to 15th position, and finish second of the CRT bikes, right on the tale of HRC test rider Akiyoshi.

Colin Edwards once again struggled on his Forward Racing Kawasaki, but team mate Claudio Corti had a slightly more productive day, and finished ahead of his vastly superior team mate.