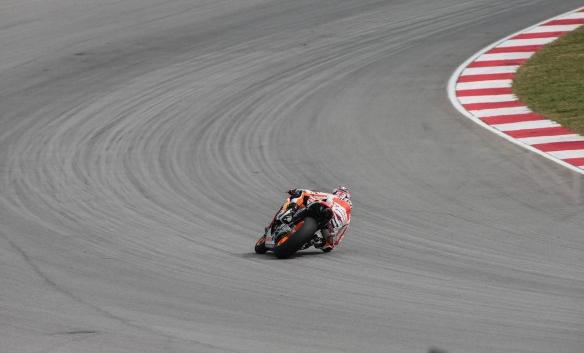 Dani Pedrosa once again posted the fastest lap of the day during day two of the three day pre season test in Sepang, with world champion Jorge Lorenzo close behind.

Day two at the Sepang International Circuit, was a productive day for the teams as every rider with the exception of exception of Lukas Pesek and Yonny Hernandez bettered their times from yesterday. This was in spite the mandatory Malaysian thunderstorm late in the day which marred the final hour.

With another days rubber laid down, and cloudy cooler conditions the track was perfect for riding. World Champion Jorge Lorenzo was the first rider to post a lap in anger, and in doing so he became the first man of the test to break the 2.01 mark on his 6th lap out.

Despite not ending the day at the top of the timing screens, the world champion was satisfied with the day.

“Today in the morning the conditions were good and I could easily do the lap times from yesterday, I improved by more than half a second. Later we tried some little parts we couldn’t try yesterday, but not so much and the bike didn’t improve a lot.

“In the last hour it started to rain so I decided to exit and ride in the wet. We made more than eight laps in the rain. I think it was important to find the feeling in these conditions and also try the new tyre.”

With the battle heating up at the front it was going to be interesting to see how yesterdays headline mark Marc Marquez would fare, and he just got on his bike and delivered again.

Marquez was once again third at the end of the day, and even though the gap was slightly larger, he still impressed. Marquez started “playing” with electronics today looking for consistency, of his 21 flying laps, 14 were under the circuit record.

It appears that Marquez won’t fall in the testing trap Casey Stoner did, and he realizes the importance of consistency and longer runs. “I am happy, because we improved our pace a lot and that is what our focus was for today. The final stints on track were more consistent, which helped us to obtain better data. Today I started to work a little with the electronics and we have a few ideas to put into practice tomorrow or in future tests.

“This is making me learn new things and I am little-by-little understanding the way the electronics behave on this bike.”

Valentino Rossi was once again fourth position as he continued to reaquate himself with his M1, and he was over half a second quicker than his best lap time from yesterday. In spite of his improvement he couldn’t close the gap on the front two, but that didn’t worry the Doctor as he knows there is still a lot of work to be done.

“The second day of testing in Sepang is finished and the balance of the day is positive for us, especially as we finished some work on the bike. We have some different parts for the bike for this season and we continue to work on the setting.

“The positive is we improved compared to yesterday in terms of time on one lap with the new tyre but especially on the rhythm, I was half a second faster than yesterday which is not so bad. Fourth position is quite good especially as we are less than half a second behind Pedrosa and Lorenzo. Unfortunately it started to rain so we had to stop earlier, because our target this afternoon was to go into 2’00 but we will try again tomorrow.”

Cal Crutchlow was fifth and “the best of the rest” as the Brit continued his 2012 form and impressed on his Monster Yamaha Tech 3, and he finished just over 0.7s from Pedrosa’s best time.

Yesterday’s star Stefan Bradl struggled with illness today, and only managed five laps. Despite that, it appeared he only needed the five laps to impress and improve again, and was only a tenth behind Crutchlow.

Alvaro Bautista was seventh as his continued his work with the Showa suspension. He was up the top of the timing sheets in the morning, but focused more on bike improvements than lap times in the afternoon and finished the day 1.1 seconds off the pace.

Bradley Smith made the biggest improvement today, and finished the day in eighth position, and he managed to improve by over 1.5 seconds and was just  just two tenths of second short of Alvaro Bautista’s best time.

The rookie was delighted with his day’s work, but has promised to keep his feet grounded.

“Today’s performance and the final lap times makes me feel really happy but I am not going to get carried away. I am happy with the job I have done and to be so fast on such a long and technical track is great for my confidence. But I know reducing the gap to the leading group will be very difficult.

“There’s still a long way to go but it is nice to be so much faster than yesterday and to see some real progress. A lot of it is down to trusting the bike and having the confidence to ride it to the absolute limit to get the best out of it. I’m not at that point yet but each time I go out I get a better feeling. The great thing with the Monster Yamaha Tech 3 Team is they make me feel calm and concentrated and they give me a focus to work on my technique out on track. The lap times are coming from the work we are trying to improve in key areas.

“It never feels easy on these bikes and you don’t get time to rest, but when it becomes more like your friend then you start making steps forward. The team gives me a plan and an area to work on and I try to implement it on track.”

It was another day of head scratching for Ducati, as they improved with the rest of the field, but couldn’t close the gap to the top substantially.

Pramac new boy Ben Spies making the biggest improvement of the four Ducati’s, despite rumors that he wouldn’t be able continue testing due to shoulder pain, he managed 27 laps today before his should eventually had enough.

Even with the improvements Spies still can’t ride as he would like. “I can’t ride like I want,” said the Texan. “I can’t brake where I want, I have to take it slow.” So this may give Spies some encouragement, although it is still an alarming gap to the top.

Nicky Hayden was once again the top Ducati and he finished the day in ninth position, and w best lap 1.561 from Pedrosa’s. Factory team mate Andrea Dovizioso continued his learning with the Ducati, and must be wondering why he ever left the Tech3 team and he finished in tenth.

The two test riders Aikiyosh and Nakasuga split the factory and the satellite bikes as they were eleventh and twelfth respectively.

Spies’ Pramac team mate and MotoGP rookie Andrea Iannone was 15th and the final prototype, just ahead of Aspar’s Aleix Espargaro who was once again the fastest of the CRT machines.

Danilo Petrucci continued to impress on his IODAracing Suter and he was right behind De Puniet in 18th position.

The Blusens Avintia duo of Aoyama and Barbera finished the day 19th and 20th respectively just ahead of ART debutantes Karel Abraham and Michael Laverty.

Colin Edwards endured another tough day at the track, although with the new ECU this was always expected to be a  long test for the Forward Racing team.