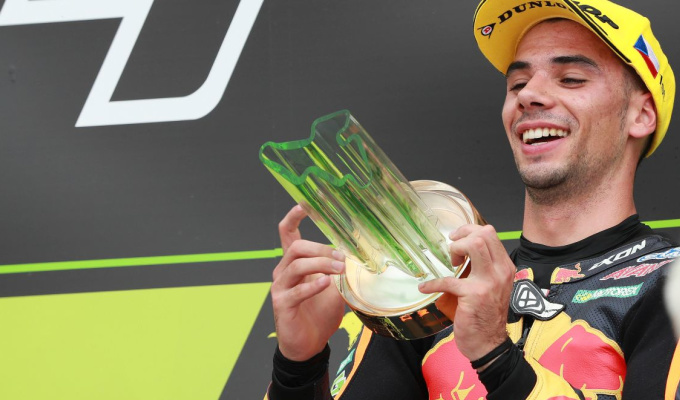 Miguel Oliveira held of Luca Marini to claim his second win of 2018 and take the lead of the Moto2 World Championship from Pecco Bagnaia.

After a positive qualifying session, the Portuguese rider found himself starting from fourth position. After a good start, it became obvious early that the battle for the race victory was between the KTM man and the Sky Racing VR46 duo of Marini and Bagnaia.

With the leading three all exchanging places, Lorenzo Baldassarri managed to close the gap making it a four-way fight for the lead with seven laps to go. Baldassarri wasted little time in making his way to the front of the quartet with four laps to go. After getting to the front it became evident that Baldassrri’s tyre had cooked his tyre getting to the leaders. Oliveira and Marini moved back past Baldassarri with three laps to go, but the Italian managed to hold up his good friend and leave the front two a second and a half ahead going into the final lap.

Marini moved under Oliveira going into the bottom of the hill at turn ten, before the KTM rider moved past going into the final two corners. Marini moved back past in the penultimate corner before Oliveira’s experience saw him move back under the Italian for the race win ahead of the VR46 duo of Marini and Bagnaia.

Baldassarri was fourth and two and a half seconds ahead of Xavi Vierge. Sachsenring winner Brad Binder was sixth and just a tenth ahead of Marcel Schrotter and Jorge Navarro who were seventh and eighth respectively. Sam Lowes fought through from 22nd to finish ninth, just four seconds off of Oliveira, whilst Mattia Pasini rounded out the top ten. MotoGP bound Fabio Quartararo finished eleventh with Augusto Fernandez, Iker Lecuona, Andrea Locatelli and Simone Corsi completed the point scorers.