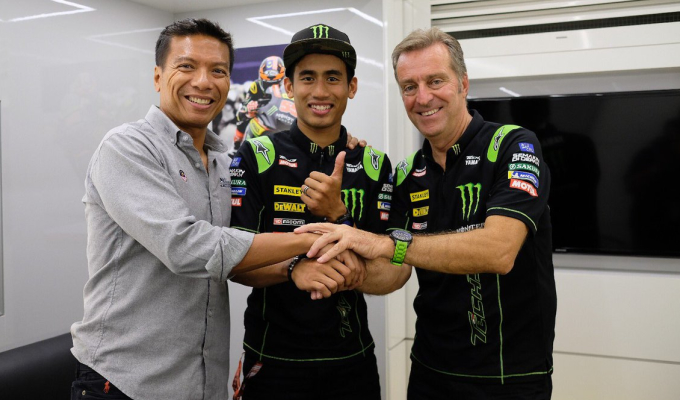 Hafizh Syahrin has signed a one-year extension with the Tech3 team as the French team move from Yamaha to KTM for 2019.

A last minute call up to the Tech3 team after Jonas Folger’s illness forced the German to sit out of the 2018 season, the Malaysian has impressed since making the step up, scoring points in four of his six races and seeing him as the top point scoring rookie, tied with Franco Morbidelli.

“It’s hard for me to say and to believe,” said Syahrin.

“First of all, I have to say thank you very much to Hervé for trusting in me and giving me this opportunity to stay with the Tech3 family and at the same time to join the KTM family.

“I also have to express a huge thank you to my manager Dato’ Razlan, who helped me to achieve this dream arriving in the MotoGP class, plus thank you to KTM for believing in Herve and in me. I will work hard for 2019 and I’ll be better prepared, as this is not as surprising as this season.

“I’m incredibly happy to get this chance, I even feel close to crying with joy. Thanks to everybody and especially to Herve and Dato’ Razlan for always believing in me.”

“Today is a very special day for me and for the whole Tech3 team,” added Poncharal.

“Since Hafizh jumped on our MotoGP bike, it’s been like a dream, every single day, because he’s been very fast and a lot faster than some people were thinking and we’ve been very proud of what he did.

“I know it was a great achievement for a Malaysian rider to be the first one of his country arriving in the MotoGP class, for his first ever MotoGP race, he scored points and since that day he has been consistently battling for the top rookie spot and apart from that, Hafizh is a very special character.”