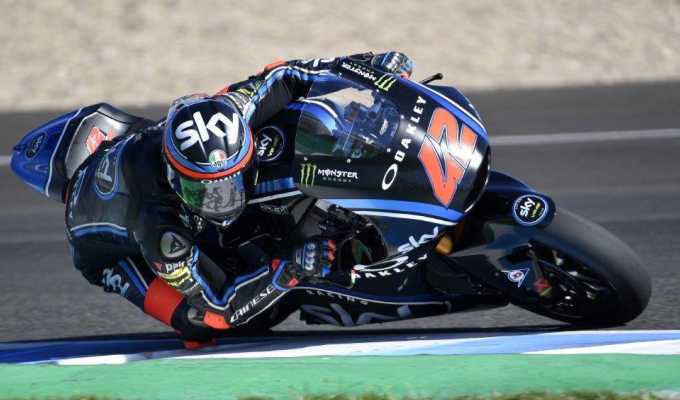 Pecco Bagnaia lead the opening day of 2018 testing with the Sky Racing VR46 rider posting the fastest time in Jerez.

The Moto2 2017 Rookie of the Year impressed on his 79 laps, with a fastest time of a 1:41.873 which was 0.293 seconds faster than second placed Alex Marquez who himself got through 73 laps on his Estrella Galicia 0,0 Marc VDS Kalex.

Winner of the final three Moto2 Grand Prix of the season, Miguel Oliveira on his Red Bull KTM was third fastest and he was ahead of the new Sky Racing VR46 rider Luca Marini, with Brad Binder finishing fifth fastest on the second KTM.

Isaac Viñales was sixth fastest on his Stop & Go Kalex with Mattia Pasini just two tenths behind in seventh. Lorenzo Baldassarri was eighth fastest and completed 91 laps as he moves from the Forward Racing team to the Pons HP40 team. The man he replaced, Fabio Quartararo was ninth and got through a mammoth 102 laps as he attempts to adjust from the Kalex to the Speed Up chassis.

Sam Lowes making his return to the Moto2 class rounded out the top ten and was just one second off of Bagnaia’s fastest time on his first day of testing the KTM chassis machine he will be running in 2018. Moto3 World Champion Joan Mir was fourteenth fastest on his first day with the Estrella Galicia 0,0 team and was one place ahead of Hector Barbera moving from MotoGP back to Moto2. Of the other Moto3 graduates, Bo Bendsneyder was 23rd with Romano Fenati one space further back and Jules Danilo in 26th.

Of the Moto3 riders present, Estrella Galicia 0,0’s Aron Canet was the fastest of the riders, just ahead of Tony Arbolino who replaced Fenati in the Spiners team. Nakarin Atiratphuvapat lead Honda team Asia team-mate, Kaito Toba, who finished third and fourth fastest on the day. Sky Racing VR46 rookie Dennis Foggia was present but didn’t have a transponder fitted to his KTM.