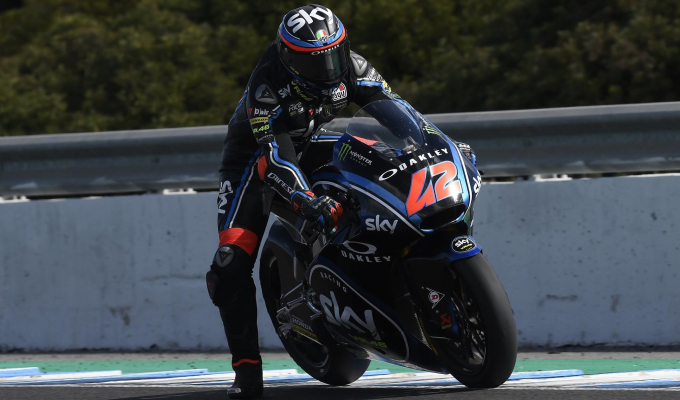 Francesco Bagnaia lead the first day of the final official Moto2 test in Jerez, with less than two weeks till the season opener in Qatar.

With rain forecast over all three days, track time was limited for all riders, sharing the track with the Moto3 riders. Despite the shortened track time it was the familiar name of Bagnaia who topped the timing sheets. A week after signing his deal to move in MotoGP with the Pramac Ducati team in 2019, the Italian was the only rider to lap under a 1:43, even if the day was curtailed due to rain.

Behind the lap record pace of Bagnaia was the impressive Iker Lecuona on his KTM and Moto2 rookie Romano Fenati. Winner of the 2017 Jerez Moto2 Grand Prix, Alex Marquez, was fourth ahead of new Pons rider Lorenzo Baldassari.

Xavi Vierge was sixth fastest on his Kalex machine with Luca Marini, Miguel Oliveira, Sam Lowes and Marcel Schrotter who rounded out the top ten.