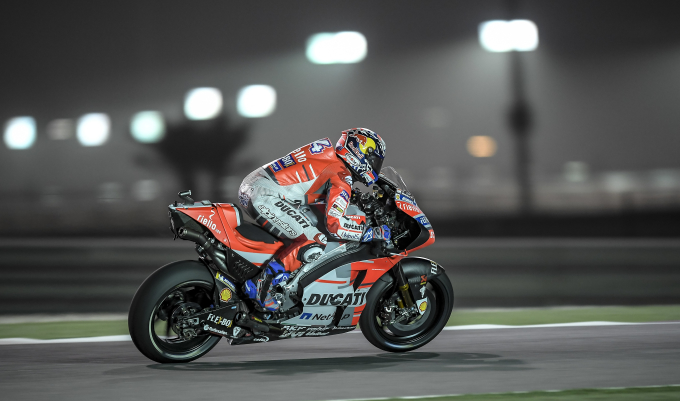 Andrea Dovizioso strikes first to claim victory by just 0.027 seconds ahead of Marc Marquez with Valentino Rossi a close third.

Starting from the middle of the second row the Italian was methodical and patient as he worked his way through the field, maintaining contact with the leaders the whole way. Pole sitter Johann Zarco was the early race leader and led a closeknit group of eight riders for the opening half of the race with Marquez and Rossi taking turns to follow the Frenchman.

Just after the halfway point of the race, the impressive Alex Rins crashed out of turn two and whilst he walked away unharmed it brought an impressive weekend to an abrupt end.

With four laps to go, Dovizioso decided to pull the plug and go past Zarco into the first corner and Marquez and Rossi quickly followed the Ducati past the Yamaha and the front three managed to breakway. Pulling a gap of nearly three seconds over Crutchlow who himself passed Zarco was a result of Dovizioso and Marquez both producing their fastest laps of the race on the penultimate lap.

With just under a second in the gap ahead of Rossi is was about if Marquez could finally beat Dovizioso on a last lap battle after coming off second best in Austria and Japan last year. Much like both of those races, Marquez waited until the final corner to attempt his pass, and again, much like the two previous races in 2017 it was an attempted block pass by the World Champion.

Aware of the danger, Dovizioso stayed on his line and used the power of his Desmosedici to outdrag Marquez’s Repsol Honda RC213V to draw the first blood in 2018.

Rossi rode to an impressive podium without ever being able to really battle with the front two despite finishing less than a second behind the winner.

Cal Crutchlow was top independent rider and was solid in his race, although struggled to keep pace with the leaders when they pulled the pin. It is a positive start to the season for the Brit who can build on his 13 points.

Danilo Petrucci managed to hold off a late surging Maverick Viñales for fifth position. The Spaniard found himself down as low as fifteenth in the early stages of the race, however he appeared to have saved his tyres, cutting through the field in the closing stages, however he left it just a little too late.

Dani Pedrosa was seventh, spending the majority of the race at the rear end of the leading group and he managed to pass long-time race leader Johann Zarco on the final lap relegating the Frenchman to eighth. Andrea Iannone was ninth aboard his Suzuki GSX-RR and Jack Miller on his Pramac Ducati rounded out the top ten.

Tito Rabat was eleventh and managed to beat out top rookie Franco Morbidelli with Alvaro Bautista in thirteenth and another rookie in the form of Hafizh Syahrin in fourteenth. Karel Abraham was fifteenth with Tom Lüthi sixteenth on his Marc VDS Honda. Fellow rookie Taka Nakagami was seventeenth ahead of Bradley Smith, Aleix Espargaro and Scott Redding with Xavier Simeon rounding out the finishing field.

Jorge Lorenzo crashed out with what appeared to be a result of an electrical error whilst Pol Espargaro was forced to retire with a mechanical issue of his own on the KTM.