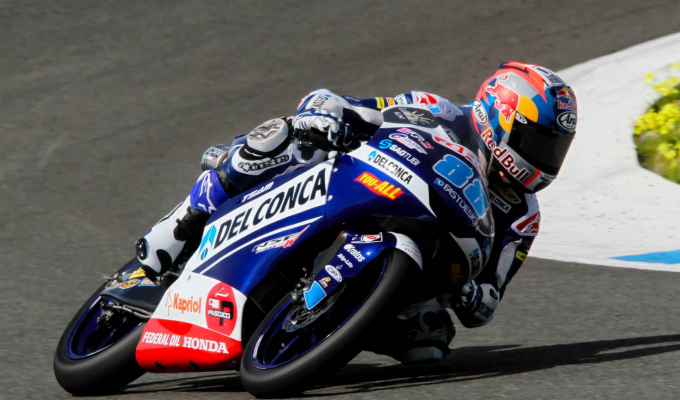 Spaniard Jorge Martin was the fastest man during the second day of the final Moto3 pre-season test in Jerez.

Early rain meant only 12 riders completed a lap in the opening session of the day, but afternoon sunshine meant riders got a lot of track time during the remaining two sessions and it was Martin’s time in the second session of the day that proved quickest.

Enea Bastianini was second fastest and a tenth behind the time of Martin as he sets about replacing 2017 Moto3 World Champion Joan Mir in the Leopard Team. Day one pace setter Aron Canet was third fastest, despite improving his time from yesterday.

Fabio Di Giannantonio was fourth fastest and just ahead of the top KTM, that of Marc Bezzecchi with a fifth Honda in the top six in the shape of Alonso Lopez sixth fastest. Niccolo Antonelli and Tatsuki Suzuki were seventh and eighth respectively with Lorenzo Dalla Porta and Livio Loi rounding out the top ten.

The Moto3 riders have three more sessions around the Spanish circuit before heading to Qatar next weekend for the opening round of the 2018 season.