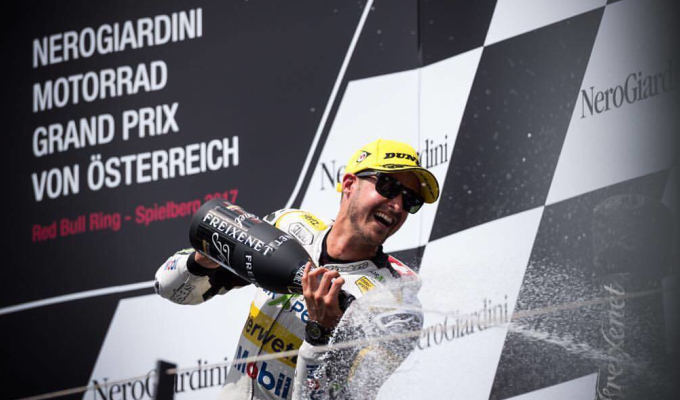 Swiss rider Tom Lüthi will be confirmed as the second rider as part of the Marc VDS Honda MotoGP team for 2018 this weekend at Silverstone.

Lüthi and Franco Morbidelli have been the standout riders during this seasons Moto2 World Championship and the Belgian outfit have secured the signatures for both for next seasons MotoGP season.

31 in September, Lüthi is older than a lot of other rookies when they eventually make their way to MotoGP, although the Swiss rider has more than served his time, never finishing outside the top six since the Moto2 class was introduced in 2010. Over his eight years in Moto2, Lüthi has amassed nine wins and 35 podiums and he is currently sat second in the World Championship behind Morbidelli.

Despite never competing in a MotoGP race, Lüthi does have some MotoGP experience when he was invited by the KTM factory to test the RC16 last year, impressing KTM with his pace with his lack of experience on a MotoGP machine.

The tactic to employ two rookies for a satellite team would look like a risky one on paper, but the Tech3 Yamaha team have enjoyed great success this season with that tactic, something Marc VDS will be hoping to replicate in 2018.

It is not confirmed, but is expected that both riders will be supplied with 2018 Honda RC213V’s much like new LCR recruit Taka Nakagami, whilst Cal Crutchlow will continue to work closely with the Honda factory in the LCR team.

With Lüthi tied up at Marc VDS and Tito Rabat and Xavier Simeon looking like they’ll be confirmed at Avintia in the not too distant future, the likes of Hector Barbera, Sam Lowes and Loris Baz are all now left searching for rides for 2018. With no MotoGP spots available, they may need to look to Moto2 or WSBK for their next move.