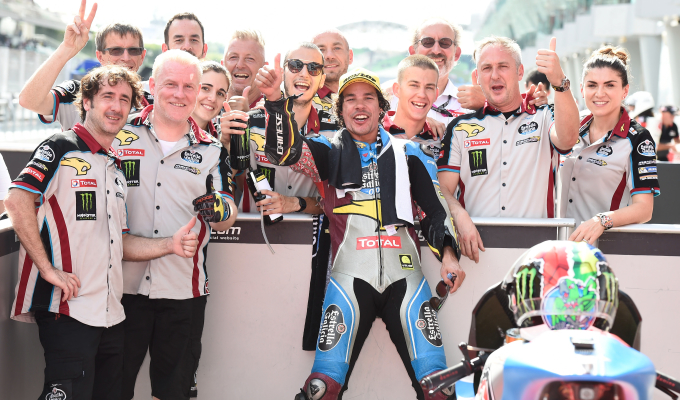 Franco Morbidelli has been crowned 2017 Moto2 World Champion after news emerged this morning that Tom Lüthi will be forced to sit out the Malaysian Grand Prix due to a broken angle suffered during yesterdays qualifying session.

Whilst Morbidelli has been crowned World Champion early, the Italian has been in a class of his own all season and thoroughly deserves his title, even if it has been awarded in unfortunate circumstances. Morbidelli arrived in Malaysia 29 points ahead of the Swiss rider and without Lüthi riding thats now an insatiable amount.

The 22-year-old has looked the standout rider this season, claiming eight victories along the way. Despite a few shaky performances throughout the season, Morbidelli has remained favourite ever since claiming victory in the lights in Qatar.

Morbidelli will stay with the Marc VDS team next season, but move into MotoGP with them alongside title rival Tom Lüthi.