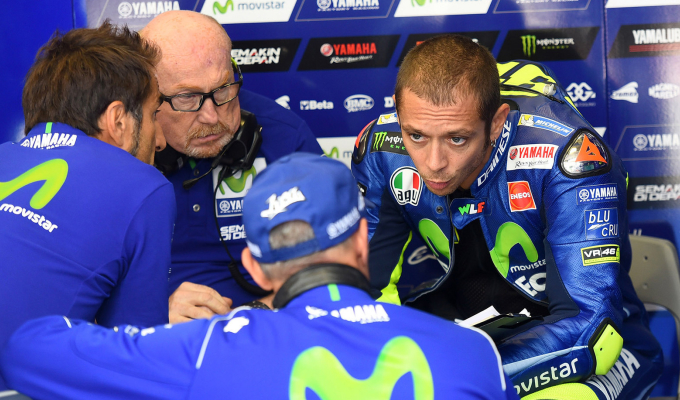 The Movistar Yamaha duo of Valentino Rossi and Maverick Viñales both nearly completed 100 laps during a private test at Misano.

With early rain in Rimini Monday morning, the MotoGP riders present had to wait until at least 1pm before getting their first laps around the circuit.

After last weekends Austrian Grand Prix both Yamaha riders were complaining about the excessive wear on their rear tyres and couldn’t find a way to stop the rear tyre spinning and wearing too quickly. Both riders had a few small parts to test, but it was very much a day or trial and error and making small adjustments t0 a lot of the existing bigger pieces of the bike.

Both Yamaha riders were vocal in their concerns about the issues the M1 is faced with and both hinted that they would need it resolved before they can even consider challenging Marquez for the World Championship.

With the track staying open until 8pm because the morning washed out, Valentino Rossi planned on using every available minute, staying on track until the late second, completing roughly 80 laps as he bid to find the solution for the rear grip issues.

As for Viñales, the Spaniard managed around 90 laps himself as he bids to find the confidence and form that has deserted him after winning three of the opening four Grand Prix.

Neither riders lap times were released, but the noises coming out from Yamaha were that both riders were happy with the advancements made and will be looking towards this weekends British Grand Prix to see the results on the track.