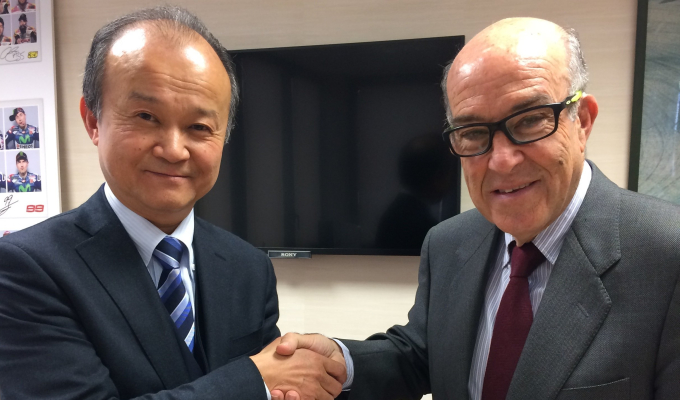 Motegi has signed a new five-year contract with MotoGP series organisers Dorna ensuring the Japanese circuit will remain on the MotoGP calendar until at least 2023.

The Honda-owned circuit will now extend it’s stay on the calendar beyond 20 years since appearing on the calendar for the first time in 1998. With MotoGP looking to extend its presence in Asia with a race in Thailand looking to be confirmed in the not too distant future, ensuring the Japanese round remains was vital for the big three Japanese factories.

President of Mobilityland Corp, Susumu Yamashita, circuit organisers was delighted to confirm the news and remain the host of the Japanese Grand Prix.

“This year represents a milestone as the Twin Ring Motegi celebrates its 20th anniversary.  It is our honour and we, as the organiser, are very pleased to be able to announce the renew of the contract of the MotoGP Japanese GP on such a special occasion,” said Yamashita.

“We feel to host the Japanese GP is very important; not just for the all the MotoGP™ fans coming to see the event but also it is valuable for all the manufactures involved. The environment that surrounds us remains severe, but we believe providing the stage stably would be sure to contribute the development of motorcycle sporting culture.

“We sincerely appreciate Dorna Sports’ kind understanding of the importance of having the event in Japan, and appreciate their strong support in having renewed the contract.”

Dorna CEO Carmelo Ezpeleta echoed the sentiments of Yamashita and said that whilst Motegi is a Honda circuit, he knows how important a round it is to all the Japanese factories.

“We are delighted to announce this contract renewal with a place that is celebrating its 20th anniversary,” he said.

“The Twin Ring Motegi is the home track of Honda and the Japanese GP is the home Grand Prix for major manufacturers such as Yamaha and Suzuki, who are main players in MotoGP class; some of the most important at the pinnacle of the Championship. We will continue the event and make further efforts, together with Mobilityland, to enhance the value of the MotoGP series.”