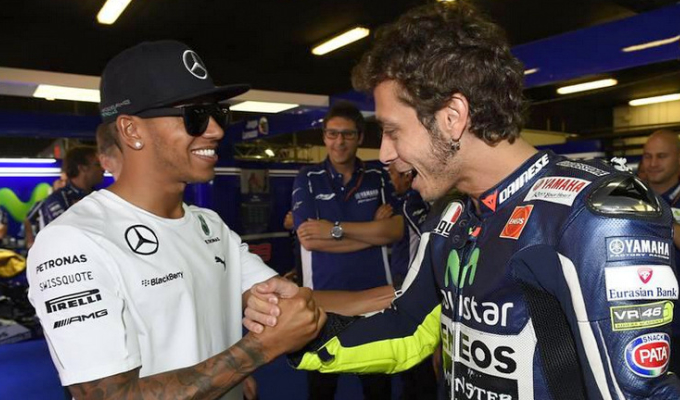 Three-time Formula One World Champion Lewis Hamilton has said that he would love to join Valentino Rossi to ride around the Doctor’s infamous ranch.

Hamilton, a self confessed big motorcycle fan, has been extremely vocal in the past about his desires to try a MotoGP machine, and in a recent interview with UK TV channel Channel 4, the 32-year-old said he would love to ride at Rossi’s ranch at his home in Tavullia.

“I love motorbikes so I’m definitely going to go to hang with Rossi at his ranch and bomb around on dirt bikes,” said Hamilton. “I’m going to definitely try and ride a MotoGP bike at some stage. Not to compete, there’s no way that I’m going to be able to beat the next 17, 18 year old.”

Earlier in the year, Rossi told Gazzetta dello Sport that Hamilton is welcome to come to his ranch whenever he pleases, revealing Hamilton was going to go to Italy last December, but never got around to visiting the Doctor.

“Lewis can come when he wants to,” said the 38-year-old. “He was going to come last December, but then nothing has happened. But for him, as fast as he is, the doors are always open.”

With the mutual sponsorship of Monster Energy between the Movistar factory Yamaha team and the Mercedes Formula One team, a sponsors event could see this happen in the not too distant future.