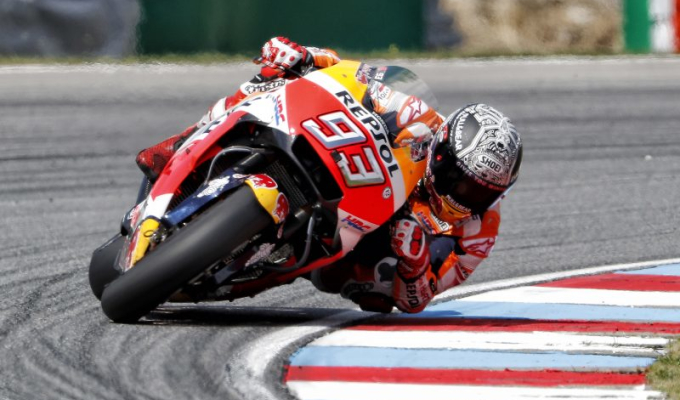 Marc Marquez said he was very happy with the progress made with the electronics on his Honda during Monday’s one-day test in Brno.

The World Champion won Sunday’s Czech Grand Prix after a masterful decision to change bikes early in the race meaning he strolled home to victory. With victory, Marquez extended his lead in the World Championship to 14 points over second placed Maverick Viñales.

The 24-year-old backed up Sunday’s win with the second fastest time in Monday’s test. Marquez’s best time of a 1:55.180 was just 0.018 behind that of fastest man Valentino Rossi.

Completing 67 laps over the day, the three-time MotoGP World Champion worked on a whole host of new parts, but put a lot of focus on honing the electronics on his RC213V ahead of this wekeend’s Austrian Grand Prix at the Red Bull Ring.

“I’m very happy with today. I had a good feeling on the bike as soon as I got on to the track,” said the Spaniard.

“Today’s fresh temperature combined with the good conditions of the asphalt allowed us to easily make some very good lap times; we have been very competitive on race pace.”

“We tried several things on our bike’s race setup as it was the perfect day to understand the various settings, also in view of the next GPs. We worked on electronics and we also tried a new front Michelin tyre. We leave from here having made a few improvements and with a few ideas to try in Austria.”