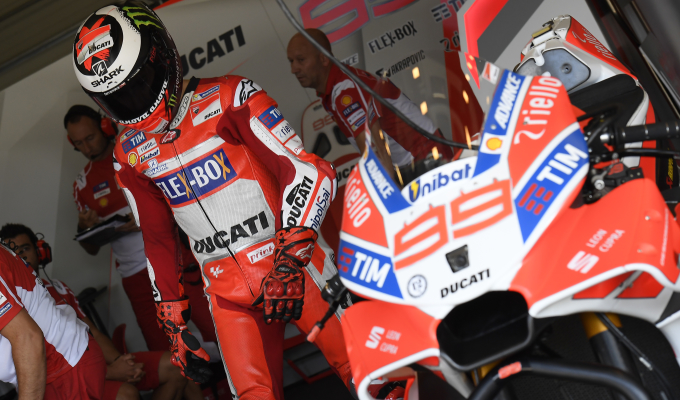 Jorge Lorenzo described today as “perhaps the most important day of the year” of him as he and Ducati took big steps forward in the post-race test in Brno.

The Spaniard ended the single day test fourth fastest and was just 0.380 seconds off of the fastest lap of the day set by Valentino Rossi. Lorenzo’s performance today came on the back of a strong race weekend before an error in the pits cost him any chance of fighting for a podium in yesterdays race.

Completing 55 laps today, Lorenzo tried a whole host of new parts on his Desmosedici as well as continuing to work with the new aero fairing that Ducati bought to Brno in a bid to find the benefits lost by the winglet ban for 2017.

Lorenzo was understandably buoyed by the progress from today, describing the feeling with the bike as excellent.

“Today was perhaps the most important day of the year for me,” said the three-time MotoGP World Champion. “I had an excellent feeling with the bike and am very satisfied.”

The 30-year-old said that he took some significant steps forward with regards to set up around his riding style on the GP17.

“Already in the race weekend we were very competitive but today we improved even more. It’s true that the track was probably in a better condition than the previous days, but we found some set-up solutions that are better for my riding style and they allowed me to push even harder and go even quicker.

“My feeling with the new fairing continues to be very good, because it gives me more confidence in the front.”

Lorenzo will be hoping that he can carry this pace to Spielberg this weekend where Ducati dominated to claim a historic 1-2 around the Red Bull Ring last year.