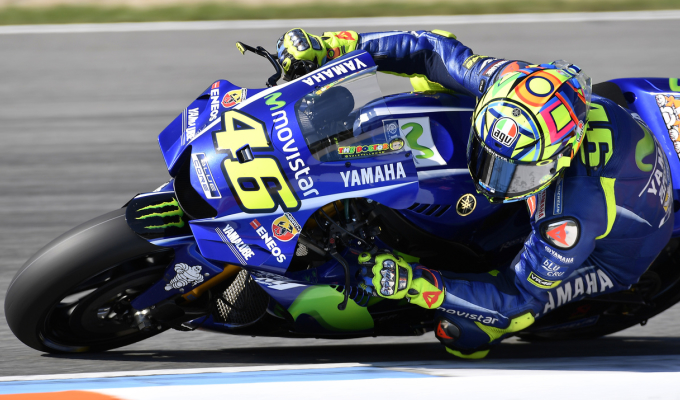 Valentino Rossi ended the one-day test fastest and happy after the progress made and the updates bought by the Movistar Yamaha team.

Rossi endured a frustrating day Sunday and ended the weekend on a high note, completing the fastest lap time of the day on his 51st of 52 laps, a 1:55.162, just 0.018 seconds faster than second placed Marc Marquez.

As part of the test, Rossi tested a new aero fairing attempting to find the aero lost from the winglet ban for 2017. The Doctor also tested some new carbon front forks from Öhlins as well as some other new items ina bid to improve the M1.

Rossi admitted he was extremely happy to see his name atop the timing sheets after the Monday test.

“I’m so happy, because it’s been a long time since I was able to be in the first position on a Monday,” said the nine-time World Champion.

“I don’t usually like the Monday tests, they are a difficult part of my work. It’s important because we finished a good weekend with a good performance. Being in first position is always a good feeling.”

The Italian was impressed with both the new aero fairing and the new forks, but thinks the forks will be more beneficial overall, where the fairings gains may be limited depending on the track.

“Between all the things we tried, we tried the fairing that was good,” he said. “I have a good feeling, but that depends on the track, I don’t think that for example at a track like Austria this fairing will be very important.

“I’m happy. I like the fork, because it helps in the change of direction and the bike is easier and lighter, so it’s a good option.”