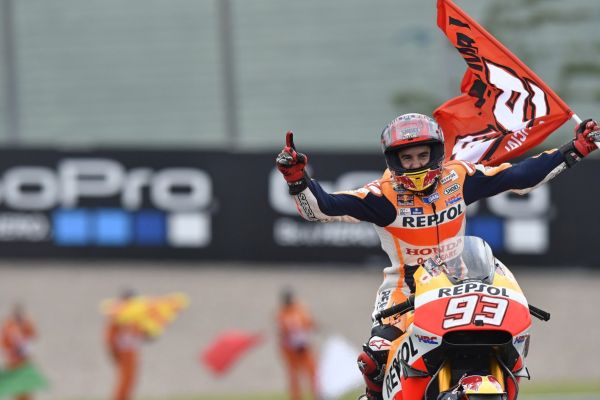 With the MotoGP season now in it’s midway break, all riders have a chance to reflect on the first half of their seasons before gathering their thoughts and forming a plan to end the season successfully. Marquez sits atop the World Championship standings by 49 points from reigning World Champion Jorge Lorenzo, and is a further 10 ahead of Rossi.

Marquez said that for 2016 he was focusing on consistency and accepting the points on offer for second place, rather than risking it all for the win, and that has been a key part in him building his cushion of almost two full race wins of Lorenzo. Both Yamaha riders have fallen victim to careless mistakes, whether it be crashing whilst leading races or tactical errors in Germany.

In spite of his big lead, Marquez is still extremely wary of the pace shown by both Yamaha riders when they aren’t making rookie errors, especially the nine-times World Champion.

“Maybe last year looked on track it was Lorenzo but Valentino was the most constant and this year I think Rossi is ever stronger, he has more speed this year. I don’t know what the reason is, if it’s the tyre change (from Bridgestone to Michelin) or whatever, but hey, they’re both there,” he said.

“Jorge is in a slump, but it wouldn’t be the first time he was in a slump and then would win five races in a row.”

Marquez will look to extend his lead in just under three weeks time when the MotoGP paddock reconvene at the Red Bull Ring in Austria, a circuit where last week both Yamaha riders struggled to match the pace of the Ducati’s.