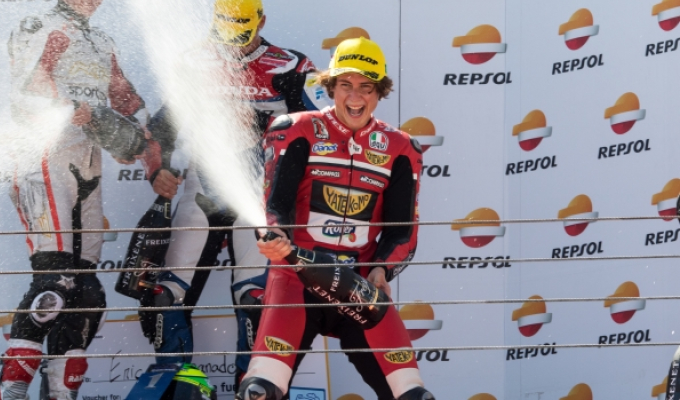 Yonny Hernandez’ time in Moto2 has come to a premature end after the AGR team decided to replace the Columbian with American youngster Joe Roberts.

20-year-old Californian Roberts will replace Hernandez for the remained for the 2017 season after impressing during his time in CEV Moto2 as part of the AGR team – including claiming two podiums already this season. Hernandez suffered a rough return to Moto2 amassing only 16 points and sitting currently 20th in Moto2 World Championship.

AGR team boss Iker Burutxaga expressed his excitement at the prospect of having Roberts in the World Championshi before going on to thank Hernandez for his effort over the first half the season.

“We’re very happy to have Joe Roberts with us for this second half of the World Championship. After his performances in the first few races of the FIMCEV Repsol, we considered that he was knocking on the Championship’s door,” he said.

“We think he’s a rider that has a high enough level to be among the best and that the earlier he takes that step, will be better for all. We are looking forward to seeing him compete with the best riders in the class. He will obviously need an adaptation period, and he’ll need to work very hard at the beginning, but we trust his talent and we believe he’ll be able to give us some good results.

“Of course, we want to thank Yonny Hernandez for the job he has done during the first half of the year and we wish him the best of luck in his future projects.”

Roberts explained how joining the World Championship is fulfilling a childhood dream and how he is using this season as a learning process rather than setting unattainable goals for the rest of 2017.

“I was surprised to get this opportunity so soon,” said the American.

“It’s been my dream, ever since I was a little kid to race in the World Championship and I was hoping for next year to get an opportunity so for me to get it this year is amazing. My expectations are basically to keep learning as much as possible and hopefully make some big steps riding with these amazing riders, some of the best riders in the world.

“If I can come in and learn some more and keep improving with my riding, that would be amazing. From the start of this year till now I’ve learnt so much about this bike and the team seems quite happy with the way I’m progressing. The best thing is to keep that going and we’ll see what happens. Thank you to everyone in the team for giving me this amazing opportunity. It’s a dream come true.”