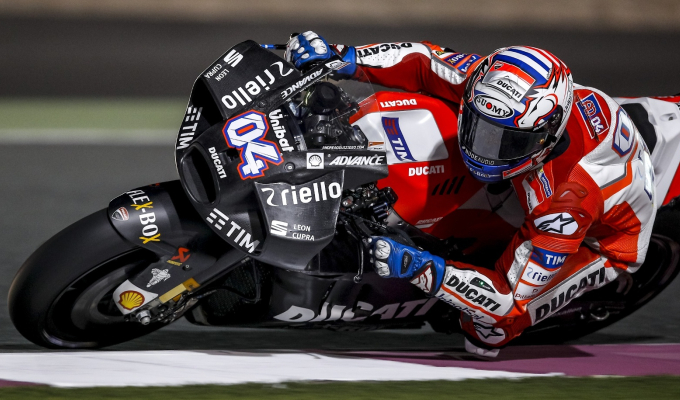 The Italian who topped the first night of testing at the Losail International Circuit struggled for pace on the second evening, ending the day thirteenth fastest overall 1.1 seconds off the fastest lap time of the evening set by Maverick Viñales.

Dovizioso said that the track conditions were very different to those of last night, although he also explained how the second night was spent testing a whole range of new parts, including the new special aero fairing, rather than doing a time trail lap at the end of the season.

“Today was an unusual day because we encountered conditions that were very different from yesterday, both with the humidity and the track grip, but in my opinion it was in any case very important to also lap in this situation,” explained the Italian.

“For sure today was more difficult than yesterday, and we used all the session to do a lot of tests and even though the times were not so good in the final classification, it was a very productive day.”

Ducati had teased that they had their bought their own fairing update to Qatar and they fitted to the Desmosedici of Dovizioso this evening. Dovi praised the work of the Ducati mechanics, although said that it still requires a lot of work because of the small modifications that were possible with different wing formations to suit each track on its merits last year.

“In the evening I also did a couple of exits with the new fairing: in my opinion, our engineers have done a great job because it wasn’t easy to create a certain aerodynamic downforce without using the winglets,” he said.

“Now we are weighing up the pros and cons before we take a decision and also work out the tracks where this solution can give the biggest advantages.”