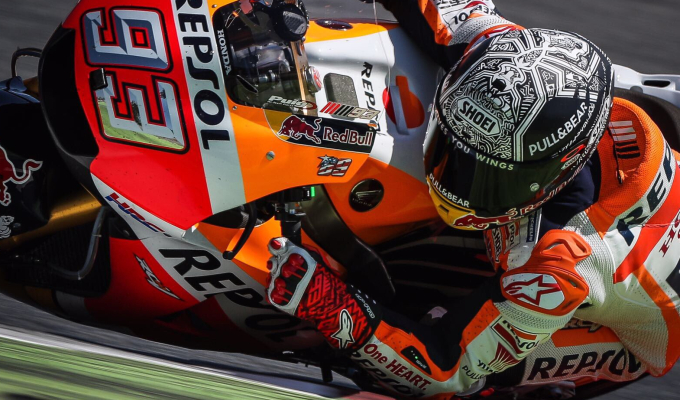 Marc Marquez topped the private test at the Circuit de Catalunya, as the majority of MotoGP riders got their first taste of the new layout.

The 24-year-old’s fastest lap of the day was a 1:43.803 late on in the day, which would’ve been good enough for second place (behind his own pole time) on the 2016 grid. The morning session was topped by factory Ducati rider Jorge Lorenzo who looks more and more at ease with every day he gets to lap on his Desmosedici. Lorenzo’s best time of the morning was a 1:43.998 which was better than his lap time on the Yamaha during qualifying last year – where he lined up second on the grid.

The MotoGP riders present got their first taste of the new layout at the Catalan circuit. The previous layout had riders going to the longer swooping turn 10, before the long fast right handed turn 13 leading them into the final corner.

Following the death of Luis Salom during free practice last year, it was decided by the riders and the safety committee that they would adopt the F1 layout, where they would take the much sharper and shorter turn 10, before the chicane at turn 13 rather than going straight on. Winter modifications added a new smaller chicane in at turn 14 for the MotoGP riders, leading to widespread displeasure with both Casey Stoner and Loris Baz very vocal on social media regarding the new layout.

Alvaro Bautista on his Aspar Ducati was third fastest and a couple of tenths ahead of Cal Crutchlow who was testing a multitude of new parts for Honda. The Brit ended the day just ahead of Repsol Honda’s Dani Pedrosa and Avintia’s Hector Barbera.

Ducati test rider ended the day seventh fastest and just ahead of Aprilia’s Aleix Espargaro. Andrea Dovizioso was only ninth, with Loris Baz, Tito Rabat, Sam Lowes and Karel Abraham all following on the timing screens. Jack Miller was also lapping although the Australian didn’t have a timing transponder fitted to his RC213V.

Casey Stoner was present in Barcelona and was in action on Tuesday, although the former MotoGP World Champion didn’t take to the track on the Wednesday.