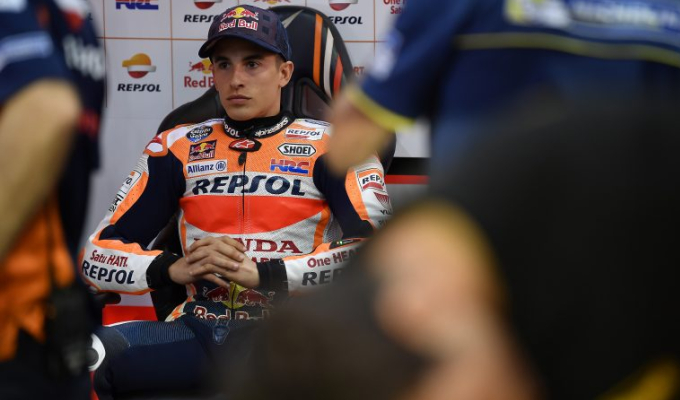 Marc Marquez has said he isn’t worried despite a first day in Qatar that saw him fall twice and end the day in twelfth position.

The reigning World Champion suffered two small crashes, one of which came on his first full lap after he fitted the new aero package that Honda have bought to the Losail International Circuit.

Despite the rough start to the test, Marquez remained pragmatic, insisting that when testing so many new parts, sometimes these are the consequences of testing.

“We can’t say today was one of the best for us, but it’s only day one and we worked hard on trying many, many different things, including a new fairing that we want to test further,” explained the 24-year-old.

“Some of them worked well, while others must be adjusted.”

Much like the opening two tests, much of Marquez’ focus was on longer race runs than single quick laps, leaving him not too worried, despite the two crashes.

“I’m not very worried about the fast lap because our rhythm wasn’t bad, so I’m satisfied with it,” he said.

“I had two small crashes; the first one was my fault as I braked a bit too late, while the second was a classic at this track as it came almost at the end of the session when the temperature had dropped and conditions weren’t good anymore.

“Anyway, tomorrow is another day, and we’ll work more on the bike’s setup for this track and try to improve.”