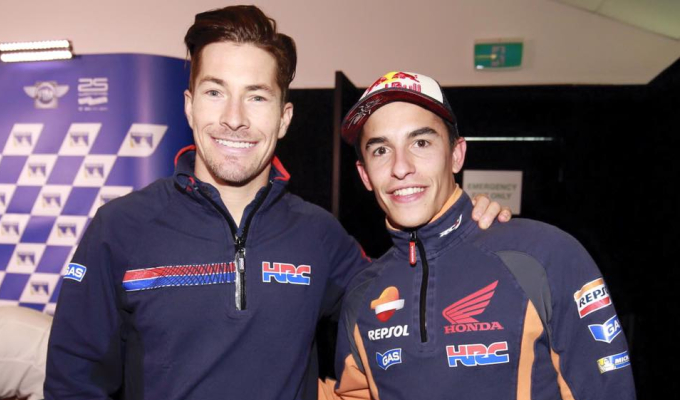 MotoGP World Champion Marc Marquez said that Nicky Hayden treated him like a big brother when he came into the Grand Prix paddock.

Marquez came into MotoGP as a fifteen year old in 2008 and Hayden was in his final season with the Repsol Honda team. As two Repsol sponsored riders, the young Spaniard was around the Kentucky Kid often and despite being a child, Marquez said that Hayden always made time for him, treating him like a little brother.

“When I arrived, I was a child and he was the champion of the world. He treated me like a little brother and I was a nobody,” the World Champion told Motorsport.com, whilst testing today as part of a private test in Barcelona.

“All MotoGP riders are a benchmark, but Nicky was special off the track. He was a gentleman, he knew how to understand, to explain, to be, and above all, he was very passionate about our sport,” said Marquez.

“We talked a lot. All his family has a great passion for motorcycling and we shared many hobbies too, flat-track, motocross, etc. A great one left us but he remains in our memory forever.”

With Dani Pedrosa injured last year, Hayden fielded a call to help and rejoined the Repsol Honda team for the Australian Grand Prix at Phillip Island. Hayden got one final ride with his World Championship winning team riding along side Marquez, who himself had just won his third MotoGP World Championship.

“It was incredible,” he said. “I spent a weekend with him in Australia last year. It was more than a race, it was like a party because I came from being World Champion and we were in full celebration.”