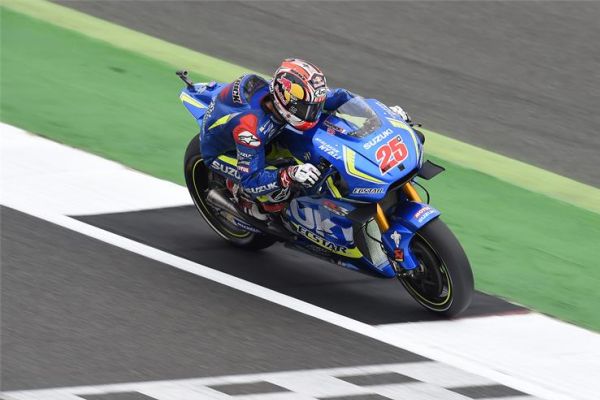 Maverick Viñales became the fourth new winner in the last five MotoGP races in winning the British MotoGP ahead of Cal Crutchlow and Valentino Rossi.

Starting from the outside of the front row Viñales took an early lead, an early lead that was never relinquished. Viñales posted consistent lap times through, managing the gap to the chasing pack to claim Suzuki’s first win since not only returning to MotoGP, but since 2007 and their first dry win since Kenny Roberts Jr. in 2000.

Behind Viñales, all the action unfolded with Cal Crutchlow ultimately coming out on top after a race long battle between the Brit, Valentino Rossi, Marc Marquez, Dani Pedrosa and Andrea Iannone. Crutchlow put a series of hard moves on both Marquez and Rossi to claim his second place, although he was aided by a mistake from Marquez in the closing stages. Heading into Stowe corner on the penultimate lap, Marquez horribly misjudged his breaking point, allowing not only Crutchlow through, but also Rossi and Pedrosa. Marquez would repass Pedrosa, but have to settle for fourth position.

Earlier in the race, Marquez and Rossi were embroiled in an intense battle for third position at the time, with the dup not only trading paint, but also touch in a span of laps not too dissimilar in what led to the infamous incident in Sepang almost 12 months ago. Marquez got the better of Rossi this time, although his mistake meant Rossi had the last laugh.

Behind the front five, Andrea Dovizioso finished sixth after a lonely race. The Italian was top Ducati, but five second behind Pedrosa and four seconds ahead of seventh placed Aleix Espargaro. Aleix Espargaro beat out reigning World Champion Jorge Lorenzo who endured another tough weekend as he continues to struggle with the Michelin tyres.

Danilo Petrucci and Alvaro Bautista rounded out the top ten. Yonny Hernandez beat his team-mate to eleventh position, whilst Alex Lowes capped an impressive debut weekend with a solid thirteenth position ahead of full time riders such as Hector Barbera, Tito Rabat, Jack Miller and the twice crashing Scott Redding.

Rossi’s third place means he will take three points out of Marc Marquez’ World Championship lead, although the Italian will have a lot of work to do if he is to catch Marquez in the closing races.