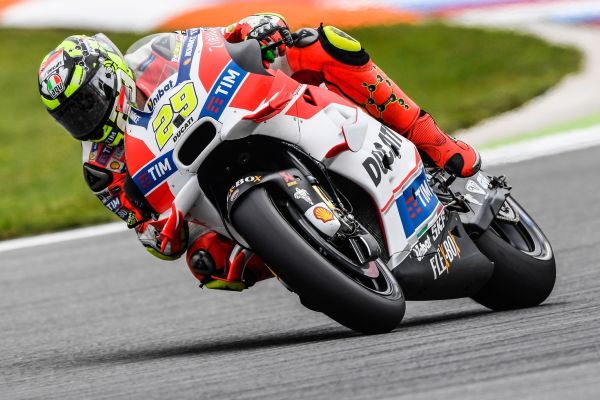 Andrea Iannone topped the first day of practice at Silverstone ahead of Maverick Viñales and Cal Crutchlow.

Rain clouds hovered around the Northamptonshire circuit, and in blustery conditions, the Maniac showed just how crazy he is with a stunning lap of a 2:01.421. Iannone’s time from the afternoon was over three seconds faster than his best time of the morning, and three tenths faster than second placed Maverick Viñales.

Viñales topped the morning session with a 2:02.483 which would’ve only been good enough for tenth position in the afternoon. Fortunately for Viñales, he did improve and ended the session just under two tenths ahead of Cal Crutchlow.

The Brno Grand Prix winner did sit atop the timing screens briefly before Viñales posted his effort. Crutchlow ends the session and the day 0.115 ahead of World Champion Jorge Lorenzo as the top Honda rider.

Not much separated Jorge Lorenzo (fourth), Marc Marquez (fifth) and Valentino Rossi (sixth) with just 0.230 separating the trio after the first day of action. Behind them Andrea Dovizioso (seventh), Aleix Espargaro (eighth) and Dani Pedrosa (ninth) were all within a second of Iannone’s best time, whilst Scott Redding rounded out the top ten.

Alex Lowes, who is making his MotoGP debut this weekend in place of the injured Bradley Smith, showed why he is held in such high regards in Yamaha circles with a solid nineteenth position. With just a handful of laps under his belt, Lowes ends his first day as a MotoGP rider just 2.4 seconds off the fastest time and just 1.3 behind his team-mate Pol Espargaro.