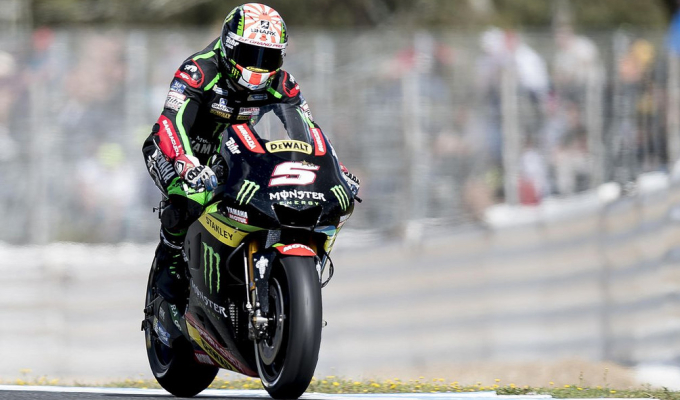 Johann Zarco will be hoping to take his remarkable start as a MotoGP rookie one step further this weekend, as he bids to claim his first MotoGP podium in front of his home crowd at Le Mans.

The Frenchman is currently in sixth position in the MotoGP World Championship after two fifths and a fourth position last time out in Jerez aboard his satellite Yamaha. Zarco’s only blip in his stunning start as a MotoGP rider came when he crashed out of the lead during the season opener in Qatar.

The 26-year-old rookie has predicted that this weekend’s French Grand Prix as an interesting weekend, whilst also admitting there’s a lot of pressure on his shoulders with a French crowd desperate to see him secure a result.

“The French Grand Prix is coming up and for sure, it will be a very interesting weekend,” said the Frenchman.

“I am excited about racing in my home country because the beginning of this season has been superb so far in MotoGP with the Monster Yamaha Tech3 team. As a result, I think that the French fans are waiting for me and for this event. There is some pressure but I tried to manage it at home, in the week before the GP, where I rested and saved the positive energy.”

Despite it being his home Grand Prix, Zarco has never won at Le Mans on the world stage with his best finish coming in 2015 when he finished third in Moto2. That hasn’t stopped him from targeting his first MotoGP podium this weekend.

“The first three venues that we have visited this year are much bigger than Le Mans, but the Bugatti circuit is small like the Jerez track. In addition, I have the advantage of knowing that because I had a good feeling in Spain, I can have a great feeling in France,” he said.

“I will fight for the best position and possibly even a top three because I am always getting closer and closer to the rostrum, which is the main target. I aim to have a strong race and then fight for the podium to make the Tech3 team, myself and all the French fans happy.”