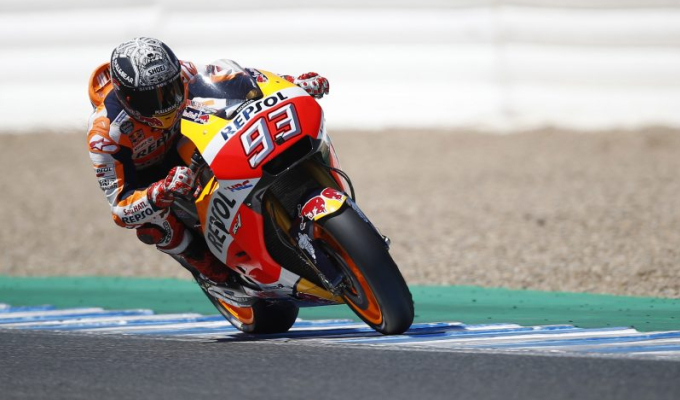 Marc Marquez has said he is ready for the unique French Grand Prix at Le Mans with the Bugatti circuit representing a very different challenge to the majority of other circuits on the Grand Prix calendar.

Despite closing the gap considerably on the Yamaha duo, Marquez is aware of the challenges at Le Mans, at circuit he has only won at once in his four years in MotoGP.

“Le Mans is particular and different from many other layouts of the Championship,” said the 24-year-old.

“It’s a really narrow, short track with a lot of stop-and-go corners. To make an example, it’s the opposite of the Montmeló circuit [Circuit de Catalunya], but still quite enjoyable.”

The Bugatti circuit at Le Mans has recently been resurfaced, providing much more grip to the riders. Michelin had a one day test last month at Le Mans with all teams invited. Despite weather interfering, Honda were the only team decided to sit the day out leaving them with a lack of data on the new surface compared to their rivals.

The grippy surface could lead to troubles this weekend for the Honda riders with the aggressive nature of the RC213V working better on circuits with a lack of grip. Despite this, Marquez has said it will have to be a wait-and-see approach this weekend to see how his bike reacts with the new surface.

“The surface is new and we’ll discover it on Friday morning. The grip should be better and that’s positive for us riders and also for the fans as it means a better show,” he said.

“We must wait and see how it goes there—this year it’s even more difficult to make any predictions. We just have to continue like we’ve done in the last races, working hard, with the right mentality, because the Championship is once again very close.”