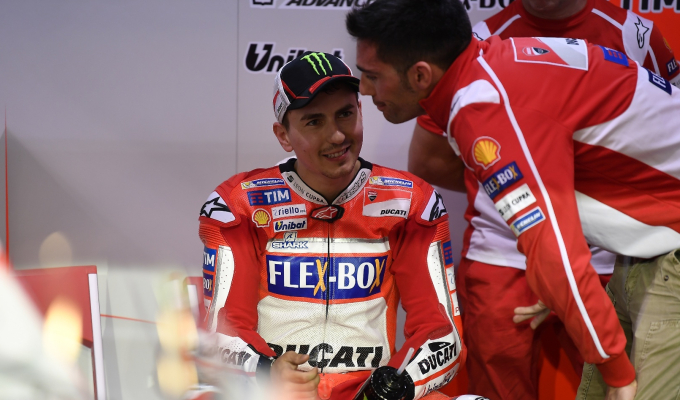 Jorge Lorenzo said that he feels more at ease with his Ducati Desmosedici every time he goes out on track after a positive first night in Qatar.

The Spaniard hasn’t adapted to the Ducati as quickly as he had hoped and after challenging tests in both Sepang and Philip Island he came to Qatar hopeful of delivering something more capable of what he is possible of.

With aerodynamic updates expected in the next two nights, Lorenzo was in a happier mood after the first night of testing under the floodlights.

“This has been my best first day in all of the recent tests: right from the start we were always up with the leaders, and we were also quickest on the track before ending the day in fifth place,” said the five-time World Champion.

“It’s important to see that my team-mate Andrea Dovizioso was also very quick, proving that the Ducati goes really strongly on this track and that also I have margin for improvement.”

Despite improving further, Lorenzo knows there is a lot of work still to be done as he continues to find the perfect setup and feeling on his Ducati.

“I still don’t have a perfect feeling with my bike, but every time I go out I feel more and more at ease with it and this circuit is certainly favourable for us,” he said.

“Tomorrow we will continue to try out some other solutions, but the conclusions we reached after today were very positive.”