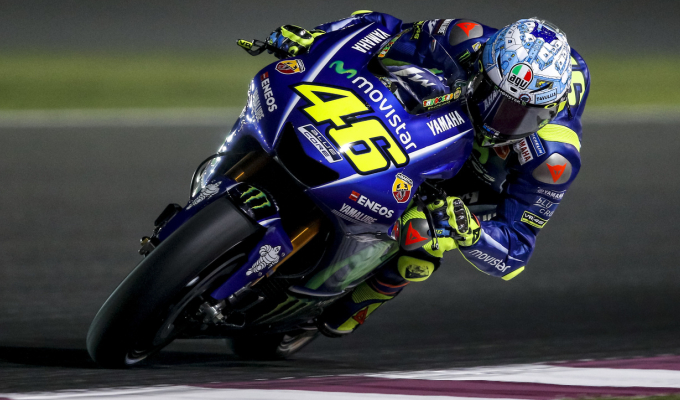 A small crash hindered the progress of Valentino Rossi in the second evening of testing in Qatar, but it didn’t stop him claiming the second fastest time of the evening.

The Italian spent a lot of the second night working on feeling with his front tyre, especially on corner entry, as well as trying to find the best possibly setting for breaking stability and the best direction in which to progress in.

Despite an early crash which saw his left hand get caught under his bike, Rossi found something in the closing hours of the evening which saw him jump from thirteenth to second, and just 0.277 behind his team mate, Maverick Viñales.

“We did some big modifications and on the second exit in turn 7 I lost the front,” explained Rossi.

“Unfortunately I have some pain, a few holes in my fingers, but I’m OK. We improved the pace and the lap times a lot. We also bettered the feeling with the bike.”

Today marked a substantial step forward for Rossi in his preparations for the 2017 season. ‘The Doctor’ has struggled through pre-season and after finding himself way off the pace in both Sepang and Philip Island, he was delighted with his pace this evening.

“I suffered a lot during the winter test and I was never really strong, so today’s lap time is important,” he said.

“Tomorrow we’ll try to continue the pace like this to understand our level. From the first time on the new bike, I didn’t have enough feeling on the front, especially to enter the corner fast. We modified a lot of things.

“I have to say thank you to Yamaha, they gave me a lot of support, especially after the test in Phillip Island, which was very bad.

“We have arrived at the front now, so it’s OK. We just have to modify the bike, the setting and everything.”