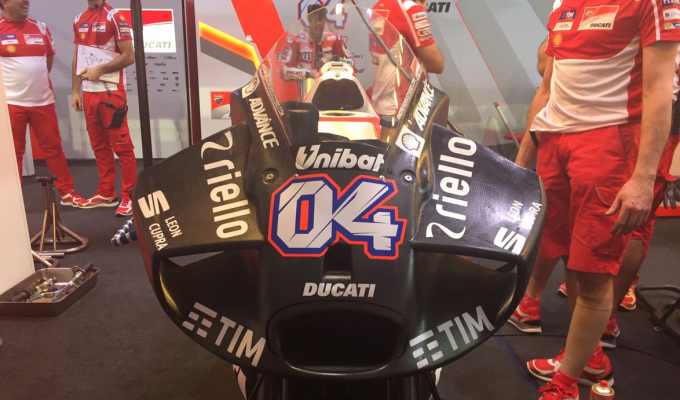 Ducati have debuted their new aerodynamic fairing, challenging the aerodynamic laws of MotoGP once again.

Pioneers of the initial winglets which would later take over MotoGP, Ducati and Gigi Dall’Igna have once again shown great initiative to try and find the marginal gains.

MotoGP bosses banned the use of external winglets for 2017 which has caused teams to think outside the box. Yamaha bought a fairing with internal winglets to Sepang and teams have been catching up since. Suzuki and Aprilia bought their version which looked like regular winglets with a fairing around the outside in Australia.

Honda then produced their own version of the legal fairing last night but Ducati have gone down a different route, producing a very different fairing, moulding over the handlebars, much higher up than the fairing used by the other factories.

Most riders have commented on the lack of front end feel since the winglets have been removed, forcing the factories to find new ways to regain the feel lost. Whether Ducati’s new fairing helps find the feeling lost remains to be seen, but it shows how aggressive Dall’Igna and Ducati remain in their bid to secure a first MotoGP World Championship since 2007.