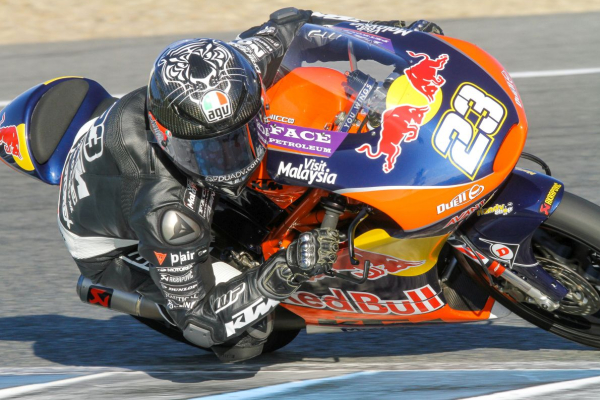 Takakki Nakagami and Fabio Di Giannantonio ended the second day in Jerez fastest in the Moto2 and Moto3 tests respectively.

After topping the the timing sheets yesterday, Nakagami topped the timings once again after another 71 laps in Southern Spain. The Japanese rider and his Kalex will be hoping to find the consistency which has been lacking in the past to mount a serious title challenge with two-time Moto2 World Champion Johann Zarco moving into MotoGP.

Alex Marquez was once again second fastest, although just 0.022 behind the Japanese rider on his Marc VDS machine and just ahead of long time pace setter Lorenzo Baldassarri. Danny Kent and his Suter chassis was fourth fastest ahead of Axel Pons. Marc VDS’ Franco Morbidelli has been forced to sit out both days of the test due to an illness. In the Moto3 class, Gresini’s Fabio Di Giannantonio was the fastest overall rider on the second day in Jerez. The Italian posted a 1:46.995 which proved to be the fastest lap of the day and two tenths of a second faster than second placed Bo Bendsneyder and Valencia podium finisher Andrea Migno.

Yesterday’s pace setter Romano Fenati was fourth fastest and just ahead of Jorge Martin and Aron Canet. Rookie Marco Bezzechi was seventh and ahead of the Mahindra of Albert Arenas and the Italian duo of Enea Bastianini and Nico Antonelli who spent the day continuing to work in their new teams.