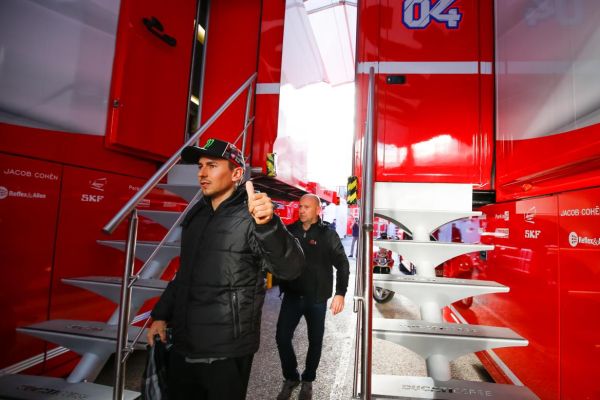 Ducati Sporting Director Paolo Ciabatti has said that Jorge Lorenzo is very happy with his first day on the Ducati Desmosedici.

Under current contractual rules Lorenzo isn’t able to speak to the media about the Ducati as he is still technically a Yamaha employee, but he is obviously allowed to speak to the team and give feedback on the bike to the crew.

Ending the first day of 2017 third fastest and just 0.122 behind the quickest lap of the day set by Maverick Viñales, Lorenzo rode bikes fitted with the winglets all day to help his transition over to Ducati more gradual. Barring one lap in the final five minutes of the day, the Spaniard spent the entire first day of testing on the Ducati GP16, with the aim of lapping solely on the GP17 tomorrow.

Ciabatti said that Lorenzo was very happy and pleased with the feeling on the Ducati after his first day as a Ducati MotoGP rider.

“He liked the bike. He feels good and has a good base to start working with. The important thing is that Lorenzo is smiling,” Ciabatti told Marca. “Tomorrow he will be on track with the GP17. We really want to do well with Lorenzo.”

Ducati test rider and brand ambassador Casey Stoner was very active in the Ducati box all day and spoke with Lorenzo for long periods throughout the day, helping the three-time MotoGP World Champion. When asked about Stoner’s impact in the Ducati pit with Lorenzo, Ciabatti said that Stoner’s experiences with the Ducati could be helpful to Lorenzo.

“Jorge and Casey could be a good partnership, but it isn’t easy. They know each other well and Stoner knows the bike well from riding in 2016, so he can be a good advisor for Jorge,” he said.