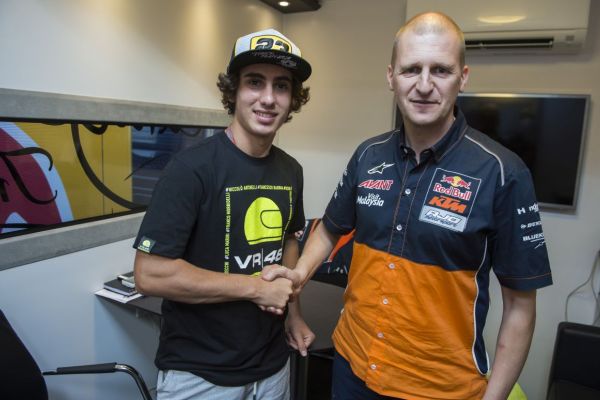 Italian Nico Antonelli has been confirmed as the man to replace Moto3 World Champion elect Brad Binder in the Red Bull Ajo KTM team, alongside Bo Bendsneyder for 2017.

The talented Italian has seen his Grand Prix career marred by inconsistency and crashes, however he will be hoping to turn that around under the watchful eye of Aki Ajo.

The 20-year-old is in his fifth season in the World Championship, and will be hoping to become the latest name to become World Champion under the Ajo banner, following in the footsteps of Marc Marquez, Johann Zarco, Sandro Cortese and Mike Di Meglio.

“I’m very happy to join Red Bull KTM Ajo because it is a dream come true. This is a team that has produced several World Champions and that has always fought to be at the top, so I want to learn a lot here next year,” said the Italian who is currently tenth in the World Championship standings.

“The aim is to fight for victory in every race, or at least be on the podium when that is not possible. I want to improve on what I’ve done in the last two years in the World Championship and will fight as much as I can to do this.

“It is exciting to ride a KTM again. I’m sure the bike is very different compared with that I rode in 2014 -even better- and I can’t wait to try it out.”

Antonelli will join Dutchman Bo Bendsneyder in the Red Bull Ajo team. The former Red Bull rookies rider has enjoyed a solid rookie season, including his debut World Championship podium at Silverstone a few weeks back.

“To be on the team one more year is a great opportunity,” said the 17-year-old.

“I want to thank Aki [Ajo] for trusting me and also Red Bull, KTM and the other partners. Now we have to concentrate on finishing this year well, and then we’ll think about next season. I am convinced that we will do a good job. We have to keep our feet on the ground and work hard every day.

“It will be nice to work with a new teammate. I’ve felt very comfortable with Brad [Binder] and I’m sure I will also be so with Niccolo [Antonelli]. I’m looking forward to working with him. This team is like a family and I really like that. Everyone is very sincere, they always say things directly and work to improve as a team. This is the most important thing.

“Next year I will do my best and see if I can be at the front, but first I want to concentrate on finishing this year well.”

“Because of his work and perfect attitude at all times, I am very happy to continue having Bo in the team,” declared team boss Aki Ajo.

“I am, of course, very pleased with the rider who will occupy the place Brad has left behind as he moves up to Moto2. Niccolo [Antonelli] is the right person for the job. He is a rider who has a method and a way of working that are very similar to Brad’s, and to many of the riders we’ve had on the team in the past. I’m sure that they will form another great team.

I do not want to miss this opportunity to thank Red Bull, KTM and our other partners for their confidence in Ajo Motorsport.”