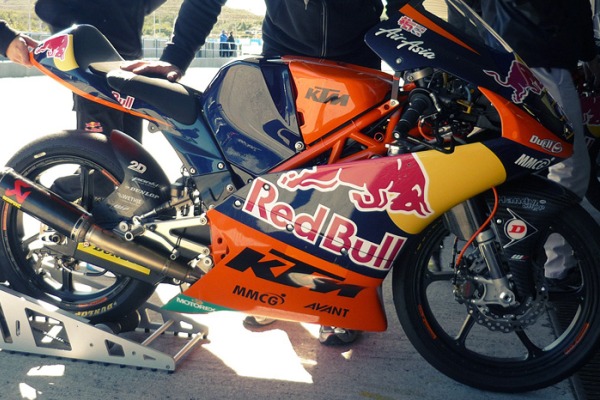 The Red Bull KTM Ajo team will once again field three riders next season, with Brad Binder and Miguel Oliveira joining Karel Hanika on the KTM’s.

The Red Bull KTM Ajo team are seen as the closest thing to a factory team for KTM, and will be looking to ensure they continue to be competitive they are looking to upgrade and build their squad for 2015, with current Moto3 championship leader Jack Miller possibly moving to MotoGP.

They have recruited South African rider Brad Binder, who is riding for the Mahindra powered Ambrogio Racing this season The 19-year-old rode for a Red Bull backed KTM when he was riding in the Red Bull Rookies Cup before moving to Moto3 in 2012, and Aki Ajo has identified Binder as his next project after Binder impressed claiming his maiden Grand Prix podium with a second place at the Sachsenring.

The second rider Aki Ajo will bring in is the Portgusese rider Miguel Oliveira. The 19-year-old had initially signed for the Ajo KTM team for the 2012 season, before having a change of heart, and signing for the Alzamora run Estrella Galicia 0,0 FTR-Honda team. He also tried to engineer a move away  from his current Mahindra team in the offseason, but the Indian brand were firm in keeping hold of the 2011 Spanish Championship runner-up.

Ajo ran a three man Red Bull squad in 2013 with Luis Salom, Arthur Sissis and Zulfahmi Khairuddin, expanding into a five man squad for 2015 with the Husqvarna’s of Danny Kent and Niki Ajo along with Hafiq Azmi on the SIC-Ajo KTM. Whether Aki Ajo keeps hold of the Husqvarna squad and riders in 2015 remains to be seen. But Ajo is understood to be willing to reduce the amount of bikes he is responsible for in 2015, with his role as a personal manager increasing.