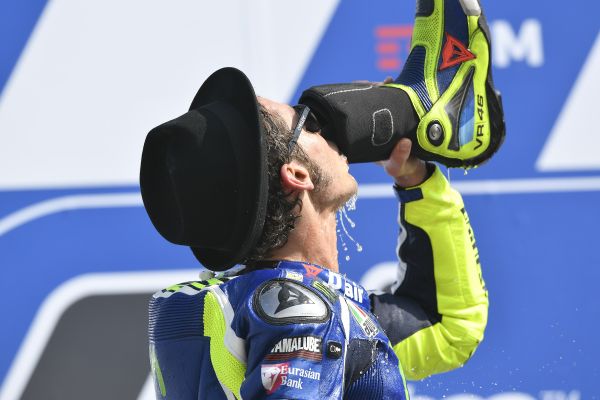 Valentino Rossi defiantly said he won’t allow Jorge Lorenzo to call him a dirty rider, after the Spaniard accused Rossi of an overly aggressive overtake during the opening stages of this weekends San Marino Grand Prix in Misano.

Lorenzo took offence to an overtaking manoeuvre made by Rossi on the third lap of Sunday’s race when the Italian forced a move inside the World Champion. Lorenzo didn’t have the pace to fight back on the Italian. would eventually finish the race behind Rossi and race winner Dani Pedrosa.

When asked in the post-race press conference, the Spaniard said it was his opinion that the move was too firm, before Rossi started laughing and denied the claims of his team-mate. The duo then got involved in a petty argument, in which Lorenzo called the Italian disrespectful towards him for laughing at his opinion and talking over him, when he was answering a question, before going on to say he thinks a lot of Rossi’s moves bored on the fair side of the line.

When asked his opinion on Lorenzo’s comments regarding the legality of some of his overtakes, Rossi was defensive, saying he didn’t feel as if his overtake was any worse than some of the moves put on him but the Repsol Honda duo of Dani Pedrosa and Marc Marquez over the past two races.

“I think it was like any other overtake,” said the nine-times World Champion. “Just like the one Pedrosa did on me or all of those Marquez did on me at Silverstone.

“I won’t let Lorenzo say I’m a dirty rider when passing, because it’s not true. He is also aggressive when he passes me.”

The Lorenzo feud was Rossi’s second of the weekend after he was involved in a verbal disagreement with Ecstar Suzuki rider Aleix Espargaro during Friday’s FP2 session.

2 thoughts on “Rossi: I won’t let Lorenzo call me a dirty rider”