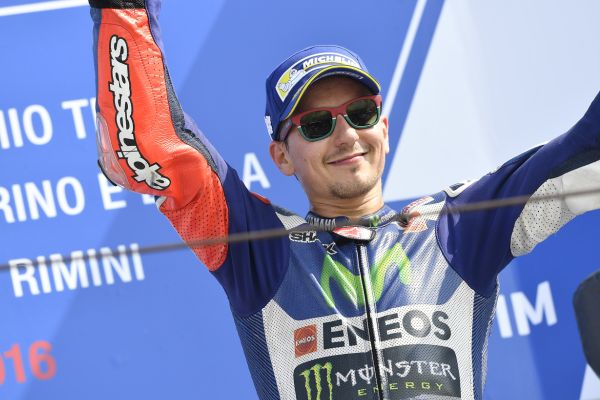 Reigning MotoGP World Champion could only manage third place in Misano, losing out to both Dani Pedrosa and Valentino Rossi as the Spaniard admitted they were just faster than he was on the day.

Starting from the pole position after breaking the lap record during qualifying, Lorenzo came into the race as a red hot favourite to kickstart his season on the Adriatic coast. However, the race didn’t pan out as the Spaniard had planned. After getting passed by team-mate Valentino Rossi on the third lap, Lorenzo never truly had the pace to challenge neither Rossi nor race winner Dani Pedrosa.

Despite a podium to get his season back on track, Lorenzo said that he was unhappy with the result as he was honestly expecting this to be a race he could challenge for the victory in.

“I can’t be very happy, because I expected a bit more from the race. I tried hard for the victory but today I simply didn’t have the best pace,” said the 29-year-old.

“Especially Dani had a better pace and Rossi had one tenth on some laps. Little by little they were going away, so I tried my best to stay there but they went ahead,” he said.

“Honestly they were faster.”