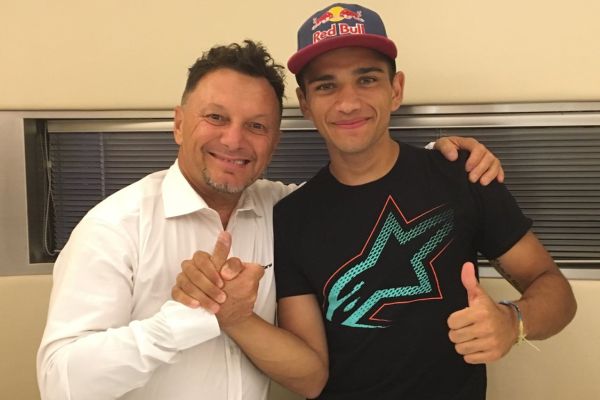 Gresini Racing have confirmed the signing for Jorge Martin to partner Fabio Di Giannantonio in the team’s Moto3 team for the 2017 season.

Di Giannontonio has enjoyed a superb rookie season with three podiums in his debut season after finishing runner up in the Red Bull Rookies last season. Di Giannontonio is currently seventh in the World Championship aboard his Honda.

The 17-year-old Italian will be joined by Jorge Martin next season, with the Spaniard coming in to replace Enea Bastianini. Martin won the 2014 Red Bull Rookies cup and the he has impressed as part of the Aspar Mahindra team so far this season. Martin took his maiden Moto3 podium earlier in the season with a second placed finish at Brno.

Team owner Fausto Gresini is understandably delighted to partner one of the brightest talents in the Grand Prix paddock, in Di Giannantonio, with one of the breakout stars of the Moto3 World Champion of 2016, in Jorge Martin.

“With the arrival of Jorge Martin, who will join Fabio Di Giannantonio, we believe we set up an excellent team for the forthcoming year,” said Gresini.

“Together with ‘Diggia’, who is enjoying an excellent debut season in a high-level championship, we will have another young rider who has already accumulated valuable experience.

“During this season, in addition, Martin showed very good performances on several occasions, thus proving to have talent and speed. We were determined to build an extremely competitive team for 2017, and I think that with these two rider we hit the target.”

Martin will replace Bastianini who is expected to replace Jorge Navarro in the Estrella Galicia 0,0 team for next season. Early rumours has suggested that Bastianini was set to sign for the Ajo Red Bull KTM team, however Nico Antonelli appears to be in line to replace Moto2 bound Brad Binder.