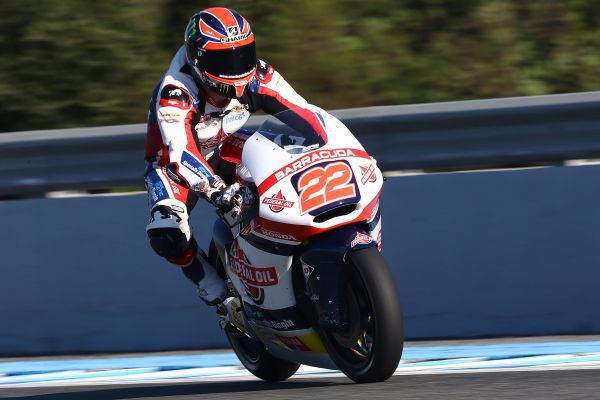 Sam Lowes’ transition from Speed Up to Kalex got off to a perfect start after he ended the final day of the Jerez Moto2 test fastest.

The 25-year old got through 167 laps during his two days in Jerez with a best lap time of a 1.42.432 which was less than two tenths off the new lap record from Rins, and just under three tenths faster than Bradl’s time.

The Brit’s time was extremely impressive when taken into account Lowes’ two previous years in the intermediate class of Grand Prix racing had seen him on the Speed Up chassis. As well as testing a new chassis, Lowes also had to familiarise himself with the Ohlins suspension on the Gresini machine.

Lowes was extremely happy with his new bike, noticing the benefits of the Kalex chassis from the moment he started riding it.

“I’m really impressed by the team and the bike,” said the Austin Moto2 Grand Prix winner.

“I feel that the potential is very high and they are satisfied with the work done in these two days – in which I’ve done a lot of laps a record for me!

“I have tried many things on the bike, mostly to get acquainted and to understand how it reacts to changes. It was a great start, the guys are fantastic and I could not be happier.”

Lowes will get two more days on his new Kalex machine when he tests in Valencia on Monday and Tuesday before the winter testing ban gets imposed.