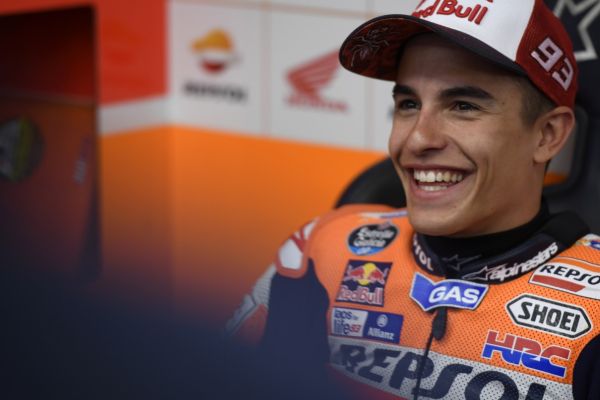 After topping the FP3 session, World Champion Jorge Lorenzo looked set to continue his red hot form into qualifying, and looked set to do so after breaking the qualifying lap record, however, a stunning circuit record lap from Marquez gave him the pole position.

Despite lighting up the timing screens, it appeared Marquez’ lap was going to be ruined by traffic coming into the final two corners. Marquez however scythed underneath Valentino Rossi and got in the slip stream of Pol Espargaro to post the lap.

Marquez’ lap time of a 1:54.596 is good enough for the new circuit record and was 0.253 ahead of Lorenzo, who held the qualifying lap record for all of five minutes.

Lorenzo will start from second position, and with rain in the air for tomorrow, he will be praying the rain stays away as he will remain confident he can challenge Marquez for victory tomorrow afternoon.

Andrea Iannone will round out the front row, despite being over a six tenths of a second slower than Marquez’ time.

Aleix Espargaro heads the second row and will be joined by top satellite bike Hector Barbera – providing he escapes any punishment from a crazy piece of riding in Q3 – and Valentino Rossi who may be doing a race dance this evening.

Andrea Dovizioso had to wait until his last lap but could only manage seventh place as he and Ducati on the whole are struggling with race pace, and is just ahead of Maverick Viñales who will be disappointed to be so far down after showing real pace in the free practice sessions. Winner for Q1 Dani Pedrosa could only manage ninth place.

Cal Crutchlow and his single LCR Honda will head the Tech3 duo of Bradley Smith and Pol Espargaro on the fourth row.